At CES 2013, P2i showed off a waterproof Samsung Galaxy S3, coated in the company’s liquid repellent nano-coating, that was able to withstand more than an hour submerged underwater.

P2i is a competitor to companies like Liquipel and HzO, however, unlike those companies that require a do-it-yourself process, P2i waterproofs smartphones before they arrive on shelves. A version of the technology is currently functioning on 25 million devices around the world including the Droid RAZR HD and Droid RAZR MAXX HD, two of Motorola’s latest Android smartphones.

It’s also said to be on an unnamed European handset maker. 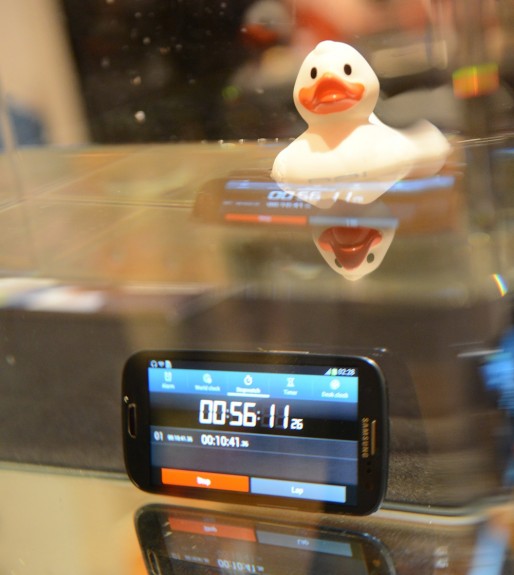 P2i’s waterproofing technology could come to a future Galaxy device like the Galaxy S4.

On the Droid RAZR HD and Droid RAZR MAXX HD, P2i provides a splash guard coating that prevents the devices from becoming damaged by inadvertent splashes from substances like water.

However, P2i is pushing it further with its new technology that would allow for a device to survive after being submerged for over an hour under water. P2i showed us a Samsung Galaxy S3, coated in P2i’s latest nano-coating, that was submerged underwater for 58 minutes. The device, even after sitting in the water for that long, was still functional after being taken out of the water.

Thus far, while P2i’s technology is a reality, it still isn’t available on any big name smartphones but it could only be a matter of time before we see high-end smartphones come standard with P2i’s coating on board. We’ve heard rumors about a waterproof iPhone for a number of years and it’s possible that Apple, Samsung or a company like HTC will apply this kind of technology to their flagship models.

Motorola, which already employs a version of the technology, could very well take the next step and use it with their always-reliable designs.

Once it happens, cases like Lifeproof and the Otterbox Armor Series, cases that protect smartphones from long durations of exposure, might start fading away and in their place, smartphones that come standard with waterproof technology like P2i’s. And hopefully, it will be devices like the upcoming Samsung Galaxy S4 and iPhone 6 that usher in this new era.