With less than a week to go before Samsung announces and unveils the new Galaxy S7 and Galaxy S7 Edge, leaks and rumors are hitting a high point. Everything from release rumors, dates, Galaxy S7 deals, to even more photos. This weekend we received what appears to be official press photos of both brand new flagship smartphones.

Last April, the Galaxy S6 was released after being announced at Mobile World Congress. Samsung announced the Galaxy S6 and a Galaxy S6 Edge. This year they’ll be doing something similar on February 21st, but the phones will be slightly different if these last minute leaks are accurate.

Retired leakster Evan Blass, known as @evleaks has been busy sharing details and images about the phone, and this weekend released key images showcasing the Galaxy S7 and Galaxy S7 Edge in multiple color variants, and confirming all the reports of the Galaxy S7 Edge having a bigger screen. Read on for more details.

At this point we know nearly everything about the upcoming Samsung Galaxy S7 and Galaxy S7 Edge. Rumors from September and late last year suggested 3-4 different models, varying screen sizes and more. However, all the rumors have settled in on two exact devices, two which continue to leak, have cleared the FCC before the release date and more.

What this means is potential buyers can expect only two phones to be announced next week at Mobile World Congress by Samsung. Those being the 5.1-inch Galaxy S7 that’s new and improved, then a bigger 5.5-inch Galaxy S7 Edge. With these photos and the more exciting features being in the S7 Edge, we have a feeling Samsung will be pushing the bigger model really hard this year.

Below are the latest photos from famed leakster @evleaks. We’re seeing the Galaxy S7 in Gold and Black (or blue) suggesting we may not see a white model at all, and the Galaxy S7 Edge in Blue, Silver and Gold. Take a look. 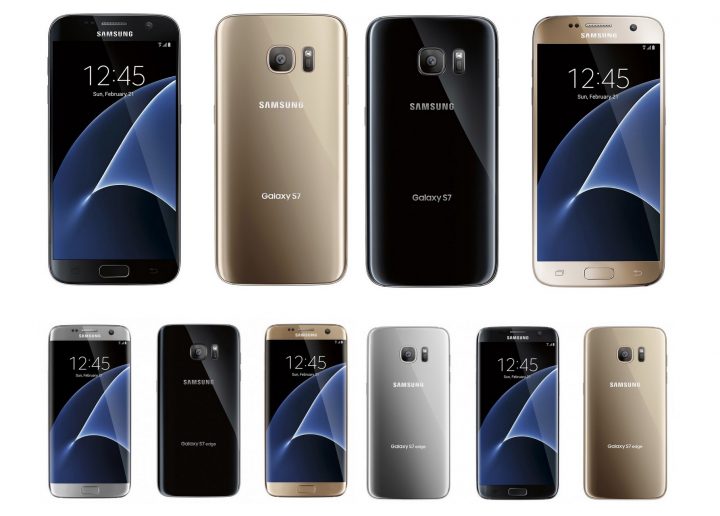 So far these are the only images that have been floating around, and we’ve yet to see a white model appear in any leaked photos, screenshots, press photos or anything. Each year multiple colors are announced but only a few are available to the United States, but this year could be different.

Samsung could offer the Galaxy S7 in 2-3 colors, then all three shown above for the Galaxy S7 Edge, from all major carriers in the United States. It’s hard to know for sure, but we will once Samsung confirms the information on February 21st.

All the details about these impressive-looking new phones can be found above. This year it looks like buyers will have the choice between two models. A 5.1-inch Galaxy S7, or a slightly bigger 5.5-inch Galaxy S7 Edge. They’ll have a similar design as last year, as we can see, but be better in every way.

A few of the changes include a bigger 3,000 or 3,600 (in Edge) battery with fast and wireless charging, dust and water-resistance, a micro-SD slot to expand storage, an improved camera with less of a hump around back, a faster 8-core processor with 4GB of RAM and the latest Android 6.0.1 Marshmallow software.

All signs are pointing to the February 21st announcement, then a March 3-4th release date outside the United States. Then we’re hearing pre-orders will go live on February 21st, and the phones could be available in from all major US carriers starting on Friday, March 11th. These dates are subject to change, so stay tuned for the latest news. As soon as we know more we’ll update with all the details.