After having been announced late last month at Mobile World Congress, the Galaxy Tab 2 10.1 is now seen at the FCC for U.S. regulatory approval. The device is the second-generation tablet that will succeed Samsung’s efforts in the 10.1-inch slate space. The model is almost identical to last year’s Galaxy Tab 10.1 model, using the same dual-core gigahertz clock speed CPU, 1 GB RAM configuration, and either 16 GB or 32 GB of storage. New on this year’s model is the option for removable storage via a micro SDHC card slot as well as a redesigned bezel that accommodates front-facing side speakers to appease Apple, a design decision that was first revealed on the Galaxy Tab 10.1N model. 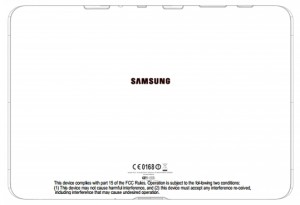 The model that is currently being evaluated right now by the FCC is the WiFi-only model. It’s unclear if the device will be coming to any U.S. carriers. In the U.S., Verizon Wireless and T-Mobile USA had offered the Galaxy Tab 10.1 on their networks. Samsung will most likely release some models of the Galaxy Tab 2 10.1 with either 3G or 4G connectivity.

With crazy numbering schemes to designate the newest generation model, having a ‘2’ and a ‘10.1’ next to each other in the name appears to be confusing at best. Perhaps this is why Apple dropped the numbering when the company had announced the new iPad as its third-generation iPad tablet.