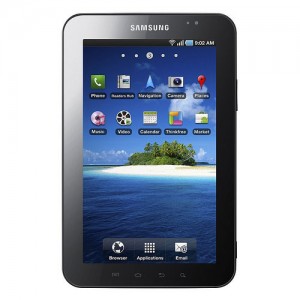 The original 7-inch Samsung Galaxy Tab Android slate is now getting an operating system update to Android 2.3 Gingerbread, which would match the OS version found on the HTC Flyer (and screen size) when that tablet launches, but is still a step behind from the latest Android 3.0 Honeycomb tablets like the Motorola Xoom, which offers a new tablet-based Android user experience. The update is now being rolled out to users in Italy of the 7-inch slate, and may start appearing in other countries as well.

The 7-inch slate was initially launched with some promising specs, including the same 1 GHz Samsung Hummingbird applications processor, a high resolution 1,024 X 600 display, and a pocketable size according to Samsung’s marketing. However, with the advent of newer dual-core Honeycomb tablets, the Android 2.2 OS, which did and does support Adobe Flash content, seems to be be aging. That said, it’s unclear why Samsung isn’t utilizing the Android 3.0 experience that’s found on the series’ larger tablets, including the Galaxy Tab 8.9 and Galaxy Tab 10.1. One possible reason is to avoid cannabilization of Samsung’s newest hardware members, but a secondary explanation may be because under Android 2.3, Samsung could still utilize its TouchWiz UI. If you recall, the newer Galaxy Tab 10.1 and 8.9 utilizes a more subtle Samsung experience UI that’s more complementary to Android 3.0 rather than be a dominating experience that aims to disguise and replace the vanilla Android experience.