With Samsung having announced the Galaxy Tab 8.9 in March at the Spring CTIA trade show, we’re only finally getting word on the device’s release. The Galaxy Tab 8.9 will be an Android Honeycomb tablet that follows in the footsteps of its larger Galaxy Tab 10.1 brother, but offers a more compact 8.9 inch display. 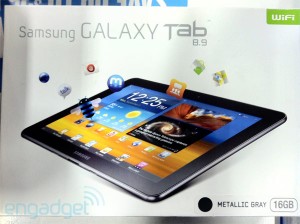 The WiFi-only 8.9-inch model will be available at Best Buy to buy on September 22nd. The tablet was previously offered for pre-order for the price of $470, which is $30 cheaper than the base price of the 16 GB WiFi-only Galaxy Tab 10.1 model.

Like the bigger brother, the 8.9-inch model will be available in either 16 GB or 32 GB capacities. Along with a dual-core Tegra 2 CPU, and 1 GB RAM, the 8.9-inch Tab will also feature front- and rear-facing cameras along with a slim profile. Whether the Tab 8.9 will also be the subject of Apple’s patent dispute is unclear at this point.