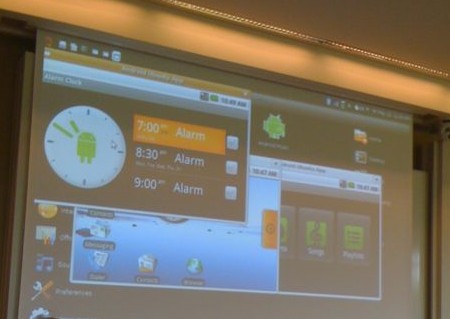 Word out of Ars Technica is Canonical, the commercial sponsor of Ubuntu, is developing a method to run mobile-type Android apps on desktop-type Ubuntu, as well as other flavors of Linux. Sounds great for anyone with an Android phone and Linux PC, which is a pretty narrow sliver of the population, but I think the implications will be much more profound, potentially reshaping the computer industry. Sound unlikely? Allow me to explain.

Until recently, the notion of running the apps from your mobile device on your PC seemed unnecessary. Mobile apps typically had PC equivalents that were more powerful and easier to use. Why run Windows Mobile mail on your desktop, when any number of client or web-based apps offered superior functionality?

For the most part that’s still true, but mobile apps have grown both more powerful and easier to use over the years. That combination makes them highly appealing to the consumer market that smartphones have begun to reach in the past few years. If you like the simple, powerful email system on your BlackBerry Storm, then why wouldn’t you want the same system on your PC? Thus, a potentially huge audience of users seeking the same experience on both their mobile and PC has begun to form. Canonical seems positioned to seize this opportunity. But they’re not alone.

Apple has a powerful advantage in this realm. Obviously, the breadth and reach of their App Store is their key strength in any mobile app analysis, but also, unlike everyone else, they use the same basic OS for both their phones and computers. We know iPhone apps can run on Mac OS X because there’s an emulator developers use to test apps before loading them on their test devices. It’s safe to assume every iPhone app has already been successfully tested on Mac OS X. What Canonical wants to do with Android apps and Ubuntu, Apple can assuredly already do with iPhone apps and Mac OS X. I can certainly see them going a step further with a dashboard-like system running iPhone apps in separate windows with multi-touch control for zooming, rotation, and shaking. When rumors of an Apple tablet eventually pan out (I’m not holding my breath for this year, but I think it’s inevitable), I would be shocked if Apple did not enable it to run iPhone apps, luring their army of iPhone users to buy them.

Microsoft appears to be in a similar position as Apple, but not quite. Emulating Windows Mobile on a PC is simple enough, but the operating systems have different foundations. Compatibility issues will likely arise as a result. Worse yet, enabling iPhone apps to run on Macs gives iPhone owners strong incentive to buy Macs, driving Apple’s larger customer base to their most profitable product line. Microsoft sees no such benefit from doing the same. Their Windows Mobile base is a fraction of their PC base, and the vast majority, if not all, of Windows Mobile users already use PCs. They gain nothing from following Canonical’s example except to stay competitive.

The other players in the mobile OS market aren’t even in the same playing field. Palm, RIM, and Nokia have no vested interest in PCs. They’d need to also make their mobile apps run on PCs to stay competitive, but they don’t have nearly as much at stake as Apple and Microsoft. On the PC side, Canonical and the various Linux makers stand to benefit from their effort, but neither they nor Android hold enough of the market to have a major impact either way.

No, by itself, Canonical’s plan does not have the mass to shift the game, but it should drive the heavy players to follow their lead and that would indeed be a game-changer. This seemingly small development could have huge repercussions. The other thing to watch, however, is whether Apple will pre-empt their efforts in their OS announcements at WWDC next month.   It will be very interesting to see how things will unfold, but I believe the convergence of mobile apps and PC  operating systems, as being pursued by Canonical,  is inevitable.