They may not be the most original developer in the world, but Gameloft (see our list of top Gameloft clone games) sure knows how to bring console experiences to mobile devices. They previously tackled the Grand Theft Auto franchise with their Gangstar series, but now they’re now taking on another Rockstar title – Max Payne. Their latest title, 9mm, ups the ante with next-gen graphics and deeper gameplay. The result just may be the most impressive – and fun – iOS game we have played. 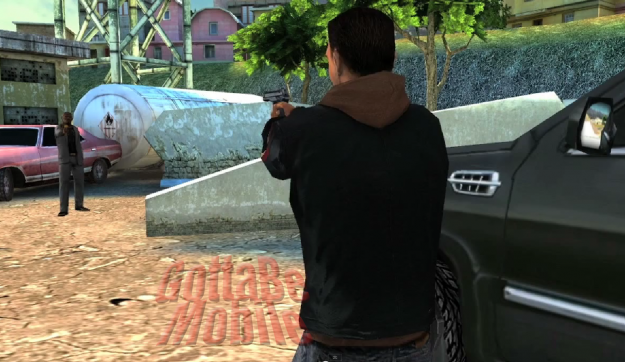 With Gameloft having teased the game with several trailers over the last several months, we learned that a) the developer likes to use Cypress Hill music to promote this game, and b) it would contain familiar Rockstar staples – strippers, shootouts, and car chases.

9mm puts you in the shoes of John “Loose” Kannon (Gameloft never won any awards for creativity), a rough cop who doesn’t see playing by the book as a requirement. Sure, it sounds like something you’ve seen a million times before – but the gaming experience ultimately transcends that.

One of Max Payne‘s standout features is “Bullet Time,” where shootouts will wind down into slow motion to give time to pick your targets and to provide a more dramatic effect. As you would expect out of one of Gameloft’s blatant copies of console franchises, the slow-mo action shows up here as well.

9mm‘s graphics on the iPad 2 are simply phenomenal for a mobile device. The gameplay is as console-like as we’ve seen from Gameloft. When this launches for Android, it will have a chance to take over the number one spot on our Top Gameloft Games for iOS & Android list.

In fairness, the lead’s gravelly voice fits the bill perfectly, but the same can’t be said for most of the other characters. Many console games have very good voice acting these days (Uncharted and L.A. Noire come to mind), and if Gameloft wants to be taken seriously as a console game maker (even if completely unoriginal) they’re going to have to do something about this atrocious voice acting that keeps popping up in their games.

To see some gameplay footage, you can check out this clip (NSFW – most definitely not to be played at work or around children):

The app is universal, so the iPhone/iPod touch version and the HD iPad version will come all in the same purchase.

We know that an Android version of 9mm will be coming as well, but it doesn’t appear to have shown up yet. We will let you know as soon as we have release info for Google’s OS.

If hardcore action games for mature audiences are your thing and you can live with cheesy dialogue and amateur voice acting, then you won’t be disappointed with 9mm. Overall, it’s the best of its kind on mobile devices – and possibly one of the best iOS games period.