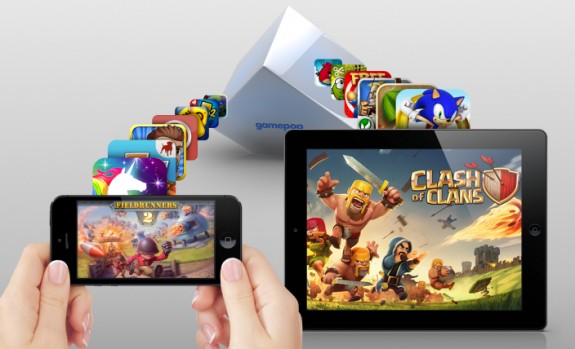 In an interview with The Verge BlueStacks CEO Rosen Sharma said the process to bring iOS games to GamePop is incredibly easy. “Literally all developers have to do is change their payments backend so it works with our subscription model and that’s it,” Sharma claimed. “They don’t have to do anything else to their games.”

Because the Looking Glass technology doesn’t use any of Apple’s code, Sharma believes Apple can’t sue his company for making iOS games run on the GamePop console.

BlueStacks already has a number of iPhone and Android developers signed on to support GamePop. Those studios include Subatomic Studios (makers of iOS classic Fieldrunners), Halfbrick (Jetpack Joyride, Fruit Ninja), Jawfish Games and Gameloft. The company also has plans to announce more iOS-first developers as the release of the console draws near.

The company also promises the popular iOS game Clash of Clans will work on the GamePop, and that it looks great on an HDTV thanks to the graphics made for the iPad‘s Retina Display.

Until the end of June interested gamers can get the GamePop console for free as long as they commit to a one-year subscription to the game service. In July users can pre-order the console for $129 and extra controllers for $20 each.

The subscription, which will give gamers unlimited access to hundreds of games, will cost $6.99. It’s like Netflix for games, but a bit cheaper.

BlueStacks hasn’t shown the controller for the GamePop console yet, but it promises that it won’t look like a rip-off of the Xbox 360 controller. Gamers who don’t want to buy a controller will also have the chance to control games through a special controller app for iOS and Android.