Ever since the first Honeycomb Android tablets started selling, both Google and Nvidia have played up their gaming capabilities. Any tablet or smartphone made in the past couple of years can run Angry Birds decently, but the Tegra 2 chip makes games with complex graphics and 3D elements really shine. So it’s no surprise that GameStop, in a bid to remain relevant in the retail space, is selling tablets specifically aimed at gamers.

What’s interesting is that they’re not just selling some random tablets. The 7-inch Acer Iconia Tab, ASUS Eee Pad Transformer, and 10-inch Samsung Galaxy Tab on offer are “customized by GameStop” with a bundle of pre-loaded games. Plus, Gamestop is bundling a Bluetooth game controller guaranteed to work with all of these devices. 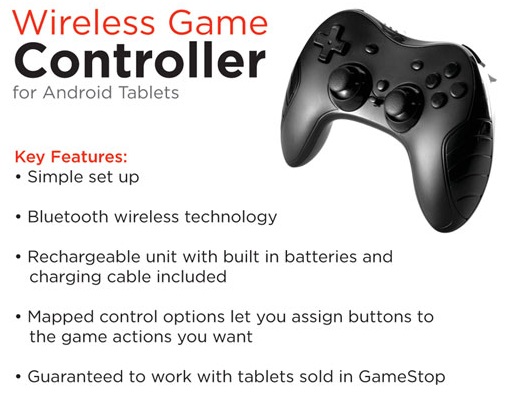 Just as with controllers for PCs, this model will allow users to map game actions and controls to buttons. This is probably even more crucial on an Android tablet because games likely aren’t made with the possibility of controllers coded in. Maybe this move will change that.

In theory, this is a good idea. For simple games like Plants vs. Zombies or Sprinkle players don’t need anything more than a finger. But once you get into RPGs, fighting games, or even old school titles like Pac-Man, the on-screen controllers aren’t so adequate. That’s why ThinkGeek’s Joystick-IT and iCade are so popular.

However, if you have a separate controller, you’re not exactly mobile, right? The tablet has to sit still while you deal with it. So there goes getting your game on while riding the bus. It’s most practical for home use, but if you’re at home, aren’t you going to play games on your computer or console?

The controller appears to be aimed more at hard core gamers than casual ones. Yet I suspect if you’re that serious about gaming you have a sweet setup at home. Maybe it’s for people who travel a lot?

I call myself a casual gamer, though it doesn’t seem very casual when I’m up until 2am trying to get all 3 stars on every level in Angry Birds. And though I don’t use my tablet much in everyday life, I will carry it everywhere when I’m working my way through a game. When I first saw the controller I thought: I have no need for that. Then I remembered that Grand Theft Auto III for tablets is coming out soon. Playing that would be so much easier with a controller…

Right now, tablets are decent gaming devices that still fall in an awkward place somewhere on the spectrum between PC and handheld games. That doesn’t have to be the case for long. Consider this: Nvidia’s new quad-core Tegra chip (Kal-El) is making it’s debut in just a few days in the ASUS Transformer Prime. Game developers already love Tegra 2 and optimize or design games specifically for the platform, and with Tegra 3 Android gaming may really take off.

I can imagine a future in which tablets become the primary gaming system for many. On the go, they’ll play games designed for touchscreens. When they get home, they’ll connect the tablet to their TV via HDMI or wireless mirroring, grab the controller, and pick up their RPG campaign.

We’re not there yet. Can GameStop hold out until that day comes? Looks like they’re trying hard to usher this new era in.