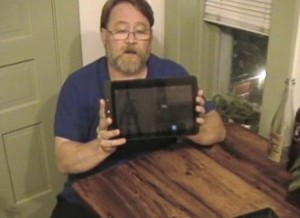 This is a tough review to write. First, Hugo Ortega, the man behind TegaTech and the Tega v2 is a friend and a Tablet/UMPC/Mobile promoter without equal, and I’d love for him to succeed with this new dual booting slate.

Second, although I have always had my doubts, I’d actually like to see Microsoft have some real skin in the Tablet/Slate game. You can say that they do and that the Tega v2 is proof of that, but unfortunately, the proof that it provides is that Windows 7 and the slate form factor made popular by the iPad just don’t mix well.

Third, after spending a weekend with the Tega v2, there is a lot to like about the device, and I really found myself questioning just how much the iPad had influenced my view of these devices. But there are also issues. The TegaTech marketing that says this device is an “iPad Killer” and the bottom line there is that the device is going to be compared to an iPad, marketing or no.

All of that said, here goes.

The Tega v2 is the first Windows 7 Slate I’ve laid my hands on and that will be the case for many a reviewer. These devices are just starting to trickle out. So much for 2010 being the year of the Tablet/Slate from Microsoft’s perspective. TegaTech is aiming this at the Enterprise market, but I would imagine there will be consumer interest as well, even with a price point of $799 US. Not only does it run Windows 7 as an OS, but it allows dual booting into Android 1.6. TegaTech promises that they are working on making later versions of Android (2.1 and 2.2) available. In fact, to take advantage of Android 1.6 users will have to download and install an image of that OS and while that can be done, you’ll have to follow instructions provided to make that work. Hackers get ready.  The review unit I was provided has both Windows 7 and Android 1.6 installed, but I’ll be focusing more on the Windows 7 side for this review. Suffice it to say that the unit handles the dual booting nicely, giving you the option of which OS you want when you press the power button.

The Tega v2 weighs in at 28.2 oz and its long and narrow (9.6 by 7.5 by 0.6) dimensions strike me as odd, given the ratio of bezel to actual screen, but that may be a personal preference. It has a capacitive touch screen that runs at a resolution of 600 x 1024. Call it a wide-narrow screen. In landscape mode the 10 inch screen feels very wide. It portrait mode it feels too narrow. Again, that may be a personal taste thing. I use Tablets and Slates in portrait mode a lot, and this just doesn’t feel right to me. There is also a balance issue. When reading eBooks in portrait mode, the device feels like it is too tall to hold comfortably for long periods of time. The

That said, the design and fit and finish of the device looks and feels pleasing. It feels professional, even with the now accepted finger prints that we see on all of these glossy devices. Some who I’ve let play around with it don’t think it feels fragile, but my first response to it was that it was as fragile as I thought the iPad was when I first laid hands on that device. Both devices require some sort of case in my opinion. I characterize the iPad as more “portable” than “mobile” and I feel the same way about the Tega v2.

The Tega v2 features two USB ports, mini VGA out, micro SD slot, an audio jack for headphones and a microphone. There is a front facing camera (1.3mp) and the review unit has a 32GB SD drive. There’s also a SIM slot. It has a fan that constantly runs, and in my experience the device can get warm to the touch but not overly so. Battery life in my weekend experience checked in at just under 4 hours when running Windows 7. That’s far from the new bench mark that Apple set with the iPad, but then that device was designed from the ground up for great battery life and the Tega v2 has to work with Windows 7.

And that brings me to the Tega v2’s biggest weakness. It’s been said before by me, and countless others, but it obviously bears repeating. Windows 7 is not the OS for these kind of mobile devices. It’s too cumbersome, requires too many resources and while the Tega v2 is a fully featured Windows 7 Tablet, it is also subject the many vagaries that Windows 7 can visit on any device. Take screen rotation for example. It works well on the Tega v2, but there is a brief blackout every time the screen rotates and some tearing of the image when the screen re-lights up. This isn’t a show stopper, but it isn’t elegant. Several folks who checked it out over the weekend actually thought they had done something wrong when they moved the device slightly. I blame Windows for this more than the hardware, or rather I blame the combo of Windows 7 and the hardware. There is no lock button for rotation, so until you get a handle on holding the device the rotation can be disconcerting. Don’t get me wrong, with the Intel Atom N455 clocking at 1.66GHz, nothing I threw at the device seemed to slow it down, although I didn’t do a ton of heavy multi-tasking. Another example is sleep mode. There is a problem with some review units returning from sleep. They don’t. That’s nothing unusual in my experience as I’ve seen laptops and netbooks have similar issues. Again, that’s Windows. (UPDATE: Just a few minutes after publishing this review I received some updated drivers from TegaTech that have fixed the sleep mode issue. This is good news.)

Inking and Touch
For Inkers, the capacitive screen works well depending on the stylus you have available. I found the Pogo Sketch to be unsatisfactory but the Boxwave/Targus styli to work much better. I was surprised by how responsive the touch experience felt. I didn’t expect such a good experience from a Windows 7 device, (or in Android either) but it worked quite well for scrolling, pinching and zooming, etc… But again, Windows 7 rears its ugly head, and for best results you do need to do some screen calibrating.

The Buttons
There are three buttons on the bezel. Power On/Off, Home, and Enter. Tapping them yields certain functionality while holding them down yields other actions. In Windows 7, holding down the Home button minimizes whatever is on your screen and returns you to your Home screen, which echoes behavior we see from other mobile OS’s. That said, my wife Thomasin and I both experienced frustration with the button placement as they are located right where your hands want to rest in landscape mode, making it easy to have an errant button press to send the unit into sleep mode or to the Home screen. Others pointed this out as well.

Browsing
Here’s a surprising comparison. Using either  IE 8 or Firefox loading web pages and browsing is a quicker experience on the Tega v2 than it is using Safari on the iPad. But quite a bit, actually. I did work with Google Chrome a bit and that experience was also faster.

Android
There is an issue with WiFi using Android that TegaTech promises will be resolved in the image that is released to customers. You can’t get a WiFi signal and not having connectivity makes the Android experience incomplete. So, it is tough for me to judge how Android works on the Tega v2 or doesn’t. Keep in mind a couple of things here. There is no Android Marketplace available so don’t think you’ll be scoring your Apps from there. Also keep in mind that even though TegaTech is promising later versions of Android, Google itself says that anything below 3.0 isn’t designed for the Tablet/Slate experience. So does that make this an unnecessary add on? Not necessarily in my view. But it does point out that what we’re seeing here at the later stages of the year of the Tablet/Slate are not going to be the devices that we ultimately judge the success of Android Tablet/Slates on. Perhaps we’ll know more about that next year this time. Although I’m starting to have my doubts about that time frame as well.

Final Thoughts
I want to like this device more than I do. It feels like it could be a competitor but at the moment it isn’t. It shows Hugo’s mobile device experience in how the hardware was designed and it is certainly pretty to look at and nice to hold. TegaTech and others who choose Windows 7 have a legitimate market to target. That market is those folks who want a Tablet/Slate and need Windows to make that work whether in the Enterprise or not. But they are saddled with an OS that works well on desktops and laptops, but alas was not meant to be on these pick up an go devices. Microsoft screwed the pooch on that one awhile ago and while there is talk of a CE based Tablet/Slate OS, we haven’t seen any real proof of that coming to market any time soon. If nothing else the Tega v2 points out what could have been had Microsoft had any real leadership over the last number of years since it decided to essentially forego the Tablet form factor. That’s a shame. For folks like TegaTech, HP, and others, it creates a real hurdle that obviously some are abandoning in favor of other solutions. For others (Google, Apple, HP and WebOS) it creates opportunity that they seem to be taking advantage of forcing Microsoft into “also ran” status before some of the other players have even started the race.

In the InkShow you’ll get a tour of the device and some of its functionality. Tomorrow I’ll be publishing at first look from my wife, Thomasin as well.

All GBM Inkshows are sponsored by MobileDemand.