Gearing up to Rally for Sanity 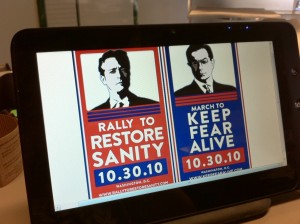 Finally, after more than a decade of living near Washington DC, someone’s holding a rally with a message I can get behind. Sure, I’ve attended rallies in the past, but that was primarily for the experience. This time I actually care, and I’m prepping my gear to show it.

The rally in question is the Rally to Restore Sanity and/or Fear being held by The Daily Show and The Colbert Report. I’ll be there to support the call for rational discourse, not just in politics and elections, but in our online tech community as well. Be it in loaded polls or inane accusations of fanboyism, we’re not above the craziness.

Regardless, I’ll be deploying to the rally packed with mobile computers. I had considered making a sign, but signs are static and a too low-tech for me. Instead, I’ll be rolling a series of messages on my TEGA v2 with my Fujitsu Lifebook T900 as backup. I think one of those messages will need to be “This is not an iPad.”

That will be in addition to photos, videos, and my usual mobile blogging from my iPhone. I have a suction cup attachment for my Gorillapod, so I’ll be able to mount my iPhone on my sling pack strap, as I did with my camera at CES 2010 (and have done in recent videos). Suction cup isn’t as good as a camera mount, but good enough (at least until I can get a Glif). There’s also an official app for the rally, which may come in handy.

We’re making it an all-day event to avoid traffic, so I’ll be packing my trusty USB battery pack with my blend of NiMh and PowerGenix NiZn batteries. May also be handy if someone else in our group runs out of juice; that’s one of the reasons I chose a USB backup power solution. No extra juice for my tablets and I’m leaving the power cords at home, but that’s shouldn’t be an issue.

Generally, not a lot of extras in my gadget bag for this outing. My wife may bring our old digital camera, but she’s generally content with photos on her iPhone 3G. The T900 is a bit redundant, but my sling pack doesn’t fit right without some heft. Plus, I may need to improvise a legible, handwritten message, aside from one that reads “Handwritten Sign”. I’ll also be rocking my SCOTTEVEST to have an easy place to pocket my TEGA, Gorillapod, and battery pack at the event (all stored in my pack during travel).

If you’re interested, I’ll be blogging via my personal outlets at Sumocat’s Scribbles, all of which goes to my Twitter. No plans on posting anything else to GBM about this, but if Colbert starts tossing Macbook Airs into the crowd, I’ll be sure to let you know.

BTW, if you’ve been watching The Daily Show this week, I assure you the bits with Jason Jones getting lost in DC are not exaggerated. If you’re driving in for the rally and your GPS tells you to take three lefts to stay on the same street, it’s not malfunctioning. The city streets are that messed up.