Starting on April 8th, Best Buy will start accepting old smartphones in return for $50 towards a new Motorola smartphone.

Verizon’s Droid RAZR is a top of the line device and was released back in October of last year. It’s also the only device of the three to offer 4G LTE data speeds, speeds that can reach up to 10 times faster than a typical 3G network. 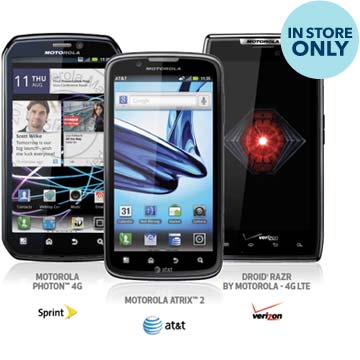 This deal is only for the 16GB model of the Droid RAZR and not the spacious 32GB model.

The Motorola Photon 4G was released back in July of 2011 and is available on Sprint’s dying 4G WiMax network and the Motorola Atrix 2 arrived on AT&T’s 3G network back in October.

Best Buy will accepting old phones inside of its retail stores as well as at Best Buy Mobile specialty stores.

The company will also be offering up to $200 in trade-in value, which will come as a Best Buy gift card, for old phones. That will depend on the kind of phone that is being traded in.

Best Buy factors in things like condition, product age and specifications, documentation when accessing how much to give.

Best Buy will cease offering this trade-in offer on May 5th, 2012 which gives consumers exactly one month to make a decision about whether to trade-in an aging device.