It looks like LG’s getting closer to launching yet another 4G LTE smartphone on Verizon’s expanding network in the U.S. in the form of a global-ready Optimus LTE II. An LG phone with the model number LG VS930, widely believed to the Optimus LTE II, was recently spotted getting FCC regulatory approval according to a report on Blog of Mobile.

The naming convention suggests that this will be a high-end LG device targeted at Verizon’s 4G LTE network as the LG Revolution carried the VS910 model while the LG Spectrum was the VS920. 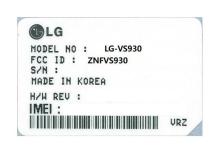 The nice part about this device is that it’s a world-ready phone, which will be good news for international travelers who are looking to hop onto GSM or 3G HSPA networks while overseas. Domestically, the LG VS930 will support Verizon’s CDMA/EVDO/LTE networks in the U.S.

There is little information about this unannounced phone and thus far neither LG nor Verizon are revealing any details. If in fact the LG VS930 will be Verizon’s Optimus LTE II variant, then the device will be competitive with the HTC One X series on AT&T and the Samsung Galaxy S III. The Optimus LTE II has a 4.7-inch HD display, dual-core Snapdragon S4 processor, and 2 GB RAM, placing it on par with rival Samsung’s flagship.

And like its Galaxy S III rival, it looks like the Optimus LTE II does have a physical home button in early leaked photos.

It’s unclear as to when this phone will launch on Verizon’s network. A possibility would be this fall at the Fall 2012 CTIA trade show, though Verizon could launch it outside if conferences and trade events.