At the TED Talks Conference in Long Beach, California, Google co-founder Sergey Brin made a rather bold claim: smartphones are emasculating. According to Brin, the reasoning is that you’re just “standing around and just rubbing this featureless piece of glass.” Brin used the forward-thinking conference as a stage to further promote Google Glass, a device that features a radical new form factor when compared to the traditional smartphone. 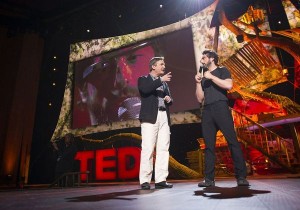 Though it’s unclear what analysis went on for Brin to make such a grand hypothesis–his company’s Google touchscreen-based Android operating system was considered more masculine in its earlier days, appealing to males more than females, especially with the Verizon-sponsored Motorola Droid campaigns.

Brin’s comments were published on CNET, a CBS Interactive property.

Though Google Glass still requires some touch interaction, Brin believes that the novel features and ways that a user interact with Glass makes it a more compelling product. Glass comes equipped with a camera that’s always ready to capture a picture, though that has also drawn some privacy concerns as well, and the new search technology aims to deliver results and information even before a user has to ask, which Google has been experimenting with its Google Now search on the phone.

“When we started Google 15 years ago, my vision was that information would come to you as you need it. You wouldn’t have to search query at all.”

Is there any merit to Brin’s emasculating comments? Or is this a clever marketing ploy targeted at the TED attendees, who are typically affluent forward-thinkers and could be likely early adopters of Glass when it debuts commercially? After all, many Americans are still bemoaning the $200 price for a flagship smartphone with carrier subsidies and a two-year contract, I doubt many typical users will spring for the $1,500 price tag of Glass.

Coupled with the odd sci-fi form factor, Glass may draw a niche audience initially, at least until Google can educate consumers on the functions and features of the novel wearable computing design. TED attendees, who are more liberal free thinkers and may not be subjected to mainstream consumerism as much as the average smartphone buyer, may be more inclined to be geeky and try Glass when it debuts. Perhaps Brin is targeting these folks by making his claim that traditional phones are emasculating.

Additionally, Brin makes the claim that smartphones are antisocial tools, and here Brin does have merit. He says that you look away from people when you’re using your phones, and I’d even go a step further in saying that at dinner tables, too many people are overly engrossed in their phones that they neglect the company that’s presently with them. Though it’s still unclear if Glass will remedy the antisocial behavior of the technology age, or if it will be better able to hide the fact that we’re distracted when we’re trying to multitask the now of our present reality and whatever we would be doing through our smartphones.

Glass may not debut until the end of this year at the consumer level. Right now, Glass is limited to developers, and Google is charging them a rather steep $1500 to preorder Glass. Brin promises that when Glass is available to consumers, it will cost less than $1,500, though it’s still unclear how much less. Even at $1,000, it’s the cost of around four or five flagship smartphones, and that’s enough to equip a family with devices.

Brin’s latest TED video for this year has still not been posted to the TED website at the time of this writing.