Google wants to solve the problem of taking your information, gaming and more from one screen to all your devices.

A new patent posted at PatentBolt.com shows off Google Deep Shot. This is a new patent which could change the way you transfer information from your laptop or tablet to your phone.

Ideally, you will be able to take a photo of whats on your screen and have an interactive version appear on your Android phone instantly. 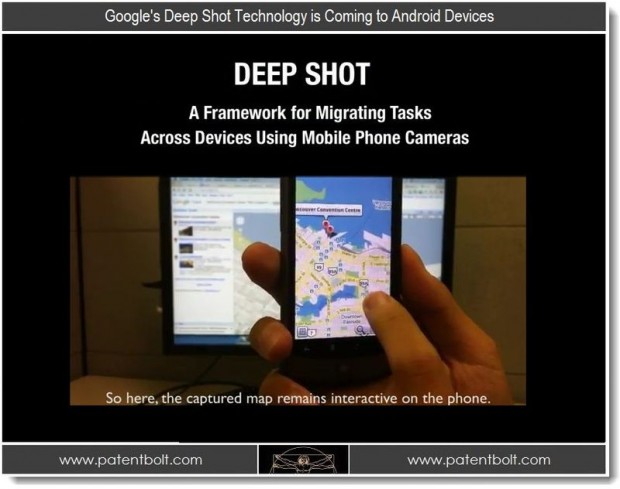 In this demo video of Deep shot, you can see a user pull a map over to his phone. The phone takes a photo, but turns it into a map in Google Maps for Android. Afterwards, the user sends a webpage to the same computer by taking a picture of the screen. It’s worth noting that the computers in question are Macs.

But, that’s not all that Google wants to do with Deep Shot. Here’s where things go from cool, to really cool. Google thinks that this same technology could help you move game progress from a console to your smartphone. Yes, just like you can move games between the PlayStation 3 and the PS Vita.

If this works, it would be nothing short of amazing. Thanks to the Humble Bundle deals, I have plenty of games that are on my Mac and on my Android smartphone. Keeping progress in sync would be great. It would be even better if I could take a console game with me on the go like I can with Onlive. Just like the webpage to computer action shown in the Deep Shot demo, users could beam the game back to the console when they return home.

The patent doesn’t delve into whether it could work on an iPhone or iPad. Google might want to make this feature a selling point of Android, but on the other hand it stands to gain financially from licensing this technology to companies who want to get on board.

I’d rather see Google make this an industry standard, than keep it as a feature only available on one phone, on one carrier.

Take a Pic, Take Your Work, Tasks and Maps On Android