As part of the ongoing Google/Oracle patent trial we’re seeing a wealth of information on the early days of Android. Today we learn that Google expected to make $278.1 million in revenue from Android in 2010.

As reported by The Verge these are the first hard numbers we’ve ever seen on Android revenue. In July 2010 Google had 20 million Android phones in the market, and expected to double that to 40 million by the end of the year. 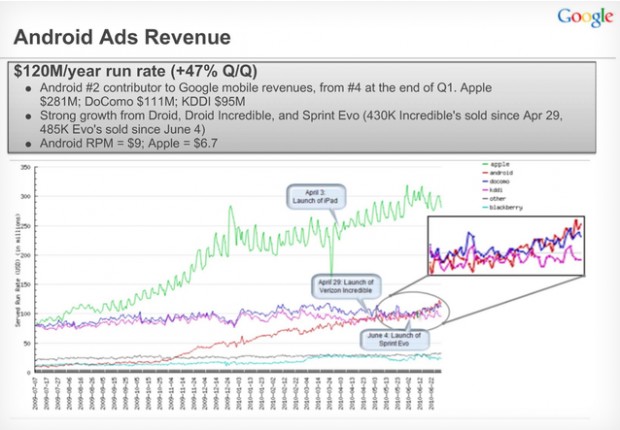 That’s not a lot of money spent on apps, and Google’s forecast for 2012 wasn’t any better. In the forecast Google expected to see $840.2 million in revenue from Android in 2012, with just $35.9 million coming from apps. Andy Rubin, Google senior vice president of mobile, listed “Market: low rate of app purchases, policy issues” as a “lowlight” for Android.

Google knew that Android users weren’t spending money on apps, and correctly guessed that the trend would continue into 2012.

There is a big disparity between the number of downloads of free and paid apps in the Google Play Store. For example, the free version of Draw Something has a total number of downloads between 500,000 and 1,000,000; while users downloaded the free version between 10,000,000 and 50,000,000 times. This tendency towards free apps has caused some developers to abandon Android in favor of the more profitable iOS.

Andy Rubin also pointed to music, video, and books as “lowlights” for Android, which is why all three are now in the Google Play Store.

In the data presented, Google expected to come into the music-selling business aggressively. The company predicted it would make $738 million on music sales in 2011, and nearly $1.5 billion in 2012. To say those numbers are optimistic is an understatement. Google Play is nothing more than an after-thought in music so far. Music is a hard market to take away from Apple and streaming services like Spotify, Rhapsody and Rdio.