A new Google Patent , published on PatentBolt, may finally give us a reason to use our front facing cameras — gestures.

Google wants to turn the camera on the front of every Android phone into a new way of controlling music, apps and much more.

Wait. I know you’re already thinking, Josh, I’m not going to wave my hands around in public. That’s the best part of this patent, and why I’m so excited.

Google wants to use the camera’s ability to detect taps and swipes so that you can simply move your finger across the camera or double tap on the camera to perform an action.

The patent reveals that Google wants to support single tap, double tap, a long pause and various swiping motions to increase the usefulness of the system. 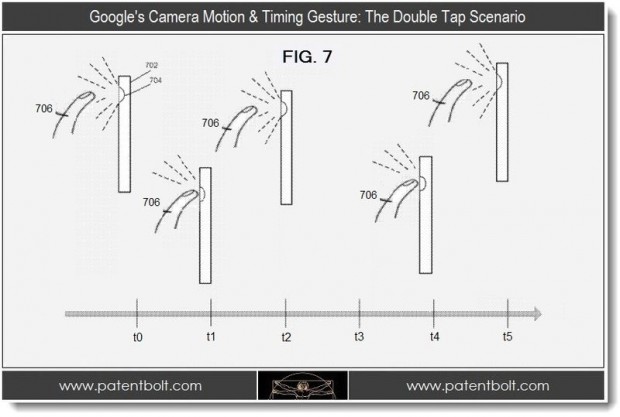 Google wants you to control your phone with the front facing camera.

Patent Bolt provides a few examples of what this might be used for,

These functions may include call or voice message functions, music playing functions, web browsing functions, or document retrieval functions. For instance, a double tap on the camera while pressing on an address book entry displayed on a touch screen may be an input gesture to initiate a phone call to that particular contact.

I’m ready for someone to hack this onto my Galaxy Nexus. One of my biggest complaints about using Android over the iPhone is media playback controls. If I could pause my audiobooks and music by tapping twice on the top of my phone, no matter what screen I’m on, I’d be ecstatic.

If this comes to fruition, I’d love to see the ability extended to the rear camera. On larger phones like the Galaxy Nexus, it would be handy to use functions with my index finger that is already sitting next to the camera. I’m guessing this would present a bigger challenge to Google, given the need to detect false gestures and ignore them.

Would you use gestures and taps to control your Android phone?