Google is conducting consumer research out in the real world to determine if everyday consumers are interested in purchasing Google Glasses. A research team is now setting up enclosed booths at street fairs in the San Francisco Bay Area to present Google Glasses to fair attendees and collect feedback.

The company drummed up a ton of attention when it teased the product in a teaser video back in April, but enthusiasm for new products from online communities doesn’t  necessarily equate to average tech buyers actually buying them. Will smartphone users clamor for glasses that capture photos from a first-person perspective and act as a head-up display? That’s what Google’s trying to find out well before the product hits store shelves. 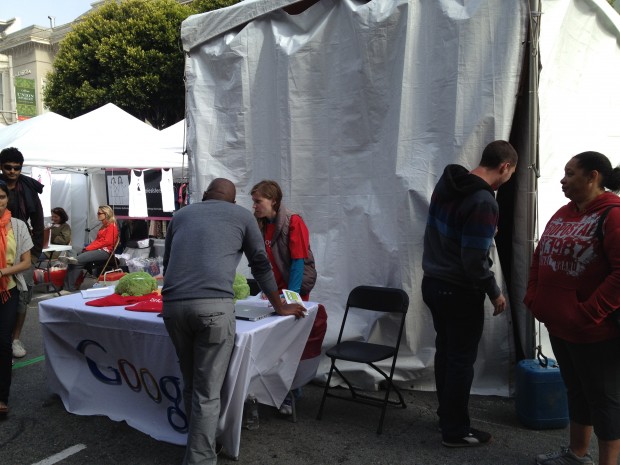 Above is a photo of the Google Research booth at the Union Street fair in San Francisco. I found the Google booth to be out of place amongst the other booths, most of which were selling handicrafts and food. I asked a Google employee what the booth was all about and she said they had something to show people that hadn’t been released yet. I asked to see it, but was told I couldn’t see it unless I “qualified.”

Outside the booth is a table where research candidates are screened with a survey. The Google Docs survey, which can be completed on either a Google-supplied MacBook Pro or Vizio Android tablet, is designed to identify physically active smartphone users that are parents and at least somewhat interested in new technology products. The survey is also used to screen for those who actively use social media.

The screening survey includes the following questions (paraphrased), with multiple choice answers in most cases.

I completed the survey and was told I qualified for the research. I have a feeling that I’m just the kind of consumer they’re looking for considering how the questions were set up and hearing a few others grumble about how they didn’t qualify.I’m a 30-something dad that is into new technology, active on social networks and spends time outdoors. Unfortunately, I Google employees told me I’d have to come back another day since the demo and survey take 20 to 25 minutes and they were booked until the end of the day.

I chatted briefly with a couple of survey participants who were milling around. They told me Google made them agree not to talk about the survey or what they saw, but the product “lets people see stuff and take photos like…in a really cool way.”

This kind of consumer research shows that Google is very serious about making Google Glasses a living, breathing product. The above video is Google’s official introduction of its glasses concept. Some have criticized the video of setting impossibly high expectations for the product.