Google Hangouts is the new Messages app for texts on the Nexus 5 and will arrive for the Nexus 4 and other Android smartphones in a Google Play Store update later this month, but it will not play nice with Google Voice.

For user who rely on Google Voice to manage calls and use a single phone number across devices, or just to keep their personal number private, this is an issue.

It gets even worse for users hoping for a swift integration between the two services as Nikhyl Singhal of Google shares on Google+ that the integration will not arrive until 2014. The reason for the delay appears tied into Google switching away from the XMPP protocol it used for Google Voice and or chat. 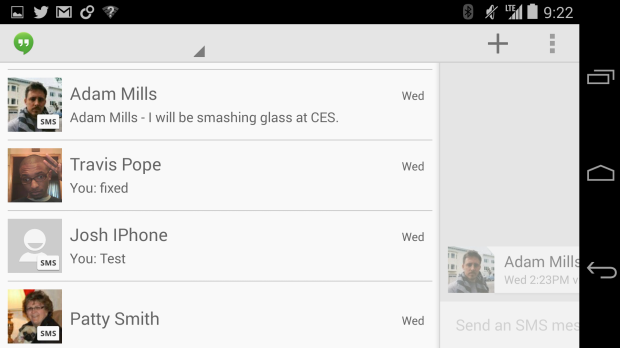 Google Voice and the new Hangouts v2 don’t play well together just yet.

Ultimately, Google is switching things up to prevent some third-party apps from connecting to Google Voice. According to Signhal this is for the security of the system. He writes,

There are a few third-party applications that provide calling and SMS services by making unauthorized use of Google Voice. These apps violate our Terms of Service and pose a threat to your security, so we’re notifying these app developers that they must stop making unauthorized use of Google Voice to run their services and transition users by May 15, 2014.

These third-party services and systems include the Obihai boxes that connect to a home router and allow users to make Google Voice calls without a computer turned on, as well as others.  These services will operate until May 2014, when Google will change the service around, and it appears the Google Voice and Hangouts integration will arrive around this time.

The Google Voice Update also addresses MMS or the ability to send photos and videos. According to the update, Google is working on this and will need to coordinate with carriers which could take some time.

It will be nice to see Google Voice integrate with Hangouts v2 in 2014, but until then it maybe frustrating for some users, especially since the Google Voice App is not an option to be the new default messages app.