Google I/O 2013 isn’t scheduled to take place for a few more months but Google has already been making preparations for the event as the company announced that Google I/O 2013 will begin at 7AM sharp on March 13th.

Earlier this year, Google announced that its annual developers conference, Google I/O, would be moved up to May instead of in June or July where it has taken place in the past. The event is currently set for May 13th to May 15th and if last year’s event is any indication, this year’s event will be a hot ticket. 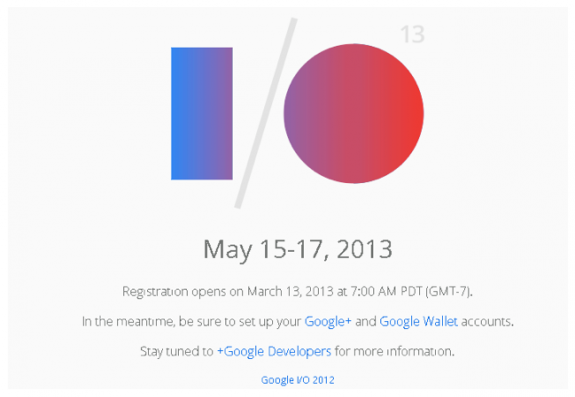 Google I/O 2012 tickets sold out in less than a hour and the same will likely occur with Google I/O 2013. Those looking to attend this year now know exactly when the registration will start as the information appeared today on Google’s website shortly after the image briefly appeared on the I/O Developers website.

The page lists Google I/O 2013 registration as beginning on March 13th at 7AM PST and the company encourages Android owners to set up their Google Wallet and Google+ accounts during the wait.

Those that are looking to snag tickets for the event should certainly circle March 13th on the calendar as these tickets will likely be a hot commodity given the rumored announcements.

Google hasn’t confirmed anything for this year’s event in terms of products but already, we believe there might be a trio of big announcements at the show. Those include a new Nexus 7, the Motorola X Phone and Android 5.0 Key Lime Pie.

The company also tends to give out something to attendees with last year’s guests receiving the Nexus 7 tablet and the ill-fated Nexus Q which since been cancelled.