Google has recently published a schedule of the various different tracks that developers can choose from as they navigate around the Google I/O conference this year, and gaming on Android appears to be a heavy focus. This shouldn’t come as surprising as it has been rumored in recent weeks that Google is attempting to take mobile gaming on Android to the next level to better compete with Apple’s iOS platform as well as Windows Phone’s Xbox tie-in.

Gaming has been a big rumor for Google’s wearable computing platform, Google Glass, with speculations that Google is planning multiplayer games. 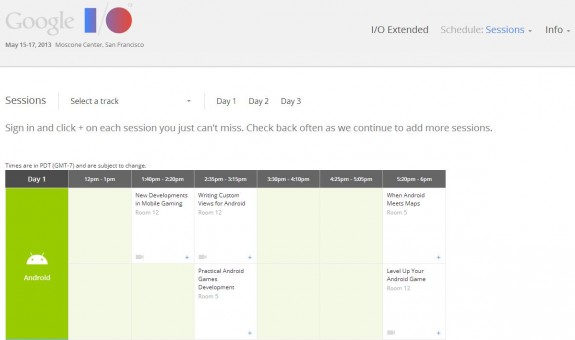 A number of tracks are dedicated to gaming for the conference, including “New developments in mobile gaming,” “Practical Android games development,” “and “Level up your Android game,” and “Making money on Google Play.”

Additionally, other tracks that may skew towards game developers without gaming in the title include “Android graphics performance,” “In-app billing version 3,” and “High performance audio.” Given better graphics and processing performance on high-end Android phones and tablets these days, a renewed focus on gaming comes as little surprise.

Users interested in seeing the Google I/O conference schedule can visit the developer portal. I/O is scheduled for May 15-17, and GottaBeMobile will be on location to provide commentary, coverage, and our analysis of what’s happening in Android and for mobile.

Beyond gaming on Android, Google also appears to also be taking gaming to the cloud with a number of performance game tracks under the “Google Cloud Platform” tracks.

There are other non-gaming tracks for Android that may signal a broader push for the platform, including location and messaging.

Google is offering a number of mapping and locations service on Android, which will not only be important for the platform and developers to serve up contextually relevant information, but also for Google to serve up relevant ads. Additionally, with wearable computing coming mainstream, having relevant location information will only serve to add value to the platform, and for users of Google Glass for example.

In terms of messaging, there’s been chatter that Google is working on a unified messaging service called “Babble” or “Babel” that will aggregate all your notifications from various Google services together to simplify your messaging. As a sort of hub, Babble or Babel may appeal to both consumers and enterprise customers in a similar manner that BlackBerry Hub has been a big selling point for that platform. With Babel, it had been rumored that notifications for services like Google Talk, Google Voice, Google+, Google+ Messenger, and possibly Gmail would be grouped together offering a one-stop destination for quick messaging, email, voice, and video.

Stay tuned to GottaBeMobile for continuing Google I/O 2013 coverage in May.