As of today, all Google Android users can add the company’s Google Keyboard to their Android phone, the same keyboard found on Nexus devices.

The Google Keyboard, which is accessible for free to all users by downloading the keyboard as a standalone application in the Google Play Store, will finally bring the functions that users of pure Google devices, that is Google’s own Nexus devices and the upcoming Google versions of the HTC One and Samsung Galaxy S4, to everyone.

After installing Google Keyboard, users will find a few impressive features that should allow users to type faster and quickly get words from dictionaries in 26 languages. 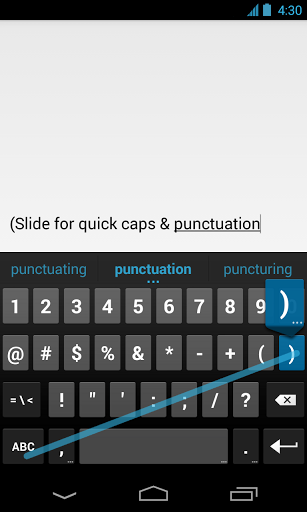 The Google Keyboard for Android

If that isn’t enough Google Keyboard also enables ways of composing messages and typing that are traditionally offered in the keyboards of Android manufacturers. For example, while voice typing is offered in Windows Phone, it’s not implemented at the keyboard level, instead developers have to create applications that support it.

Gesture typing is also supported by the keyboard as well, so  that –when enabled allows users to type complete words by simply moving their finger around the device’s onscreen keyboard to the letters that that word requires, in sequential order.

For those who are comfortable with typing on their device’s keyboard in the traditional sense but would like a few different layouts to choose from, the app does that as well.

In addition to being installed on phones, Google Keyboard can also be ran on a tablet as well. Other companies are allowed to create and sell Android keyboards as well, for example SwiftKey’s SwiftKey X offers its own set of unique features like customizable themes.

It’s important to remember that most users, never really interact with the actual Google-designed Android interface. Instead companies, like HTC and Samsung typically only offer a device with a completely remade user interface that they’ve designed to be best for their users.

While this is especially true for keyboards, the open nature of Android does allow users to freely swap out the keyboard preinstalled on a particular Android device for one from the Google Play Store. The same cannot be said for devices based on Windows Phone or for iOS.