Google now lets iOS and Android users search the web using their own handwriting without the need for a special app or keyboard.

Users don’t need the Google Search app for the new handwriting recognition, they simply need to enable to feature on Google.com. Users need to go to settings which is below the search bar on smartphones and in the top bar on tablets like the iPad. Google disables the handwriting option by default, so users need to enable it.

After enabling handwriting users simply have to tap the handwriting symbol in the bottom-right corner to turn it on. The first time it’s turned on the screen will tell the user they can write anywhere. Then users just need to write out what they want to search for one word at a time.

The handwriting recognition isn’t perfect, but it did get the words I wrote correct most of the time. The usefulness of the feature seems to depend on the handwriting of the user, so people with sloppy handwriting will probably get worse results. 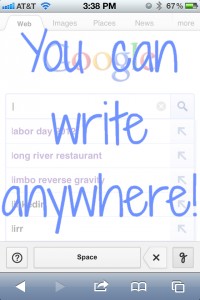 I was only able to test the feature in English, but Google says it support 27 languages, including Chinese which is show in the video above.

We don’t know why Google didn’t add this feature into the Google Search app first, but it’s still an interesting feature to have in the browser. To have instant access to it users can always add the bookmark to their home screen so handwriting search is always just one tap away.

The feature works on any iOS device using iOS 5 or above, Android phones using Android 2.3 and above, and Android tablet running 4.0 and above.