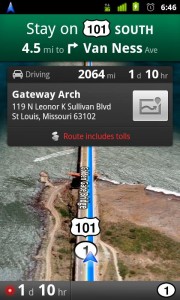 The latest update to Google Maps for Android, bringing the app to version 5.4.0, comes with several new features and bug fixes; most notable is the service’s use of crowd-sourced information to let Google’s map team know when maps are incorrect.

According to the version history, Google says of the feature, “Report “destination not here” in Navigation (Beta).”

Another new feature in the app update allows users to save their searches in Google Maps and view them later in Google Web History for their Google account. Whether this feature will prove useful or stir privacy concerns is still unclear at this point, but it may be convenient to look up your search history at a later point in your computer, for example, and quickly jump to what you were looking at on the Google Maps app earlier without having to look at your Android smartphone.