Moving beyond smartphones, tablets, and Google TV, Google wants to make Android more ubiquitous in your home with the Android @ Home project. Though Google is laying the framework and is demonstrating the potential of Android @ Home at the Google I/O conference today in San Francisco, California, the company is hoping that it’s eager and faithful Android developer base will take these ideas and run with it to create their own vision for the possibility of home control and automation. 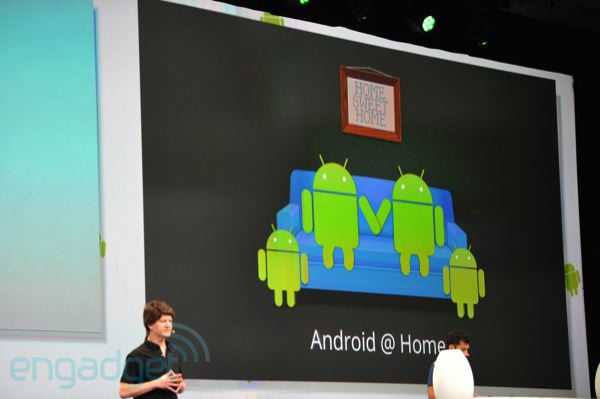 With Android @ Home, your Android-powered tablet and smartphone can literally turn your home into a smart home with smart appliances given the right hardware accessories. As such, in addition to Android developers, Google’s also partnering up with hardware partners as well.

For those existing non-smart appliances in your home–why waste a good dishwasher, for instance, if yours isn’t broken, Google is implementing a protocol for those machines that will work over the electrical system.

Essentially, Google wants users to use their smartphones and tablets to control lighting, turn on the water for sprinklers, and have a smart wake up system where the alarm will slowly increase its volume and the lights will automatically turn on to wake you up gradually. Imagine, as Google says, a real life Farmville where developers can use Android @ Home to create a watering system for their garden–do a good job and your vegetables will flourish and do a poor job and your flowers will perish.

On stage, Google announced that Lighting Science will be selling compatible lighting equipment by the end of the year for those who want to take a stab at their own home automation system.

Also along the lines of Android @ Home, another interesting demo centered around Project Tungsten, which takes NFC-equipped CDs, phones and music players and integrates it with NFC-equipped stereo system. Tap an NFC-equipped CD, for example, on your NFC-equipped home stereo system and the songs from your CD will load and play. No need to find your stereo’s CD drive and load the CD in manually.

The potential is there for Project Tungsten and Android @ Home. Apple had created a rich ecosystem for its iPod and iPhone with dock connector-compatible stereos and speakers, and Google will need a variety of hardware partners to make this really work. It’s also nice to see Google thinking ahead and not having customers have to purchase new appliances for some of these home automation practices to work–the company is developing a new protocol that works over the electrical system for those appliances. Hopefully, Android @ Home will bring more robustness to the home automation market and will make home automation cheap enough to hit more consumers.