According to Asymco, Google nets just under $3.00 per Android devices, which is significantly less than what rival Microsoft makes on Google’s platform by forcing patent licensing agreements on Android manufacturers. Asymco says that Google makes about $2.75 per device in ad sales every year.

That number pales in comparison to the $5 to $15 licensing fee that Microsoft charges Android licensees for patents that Android does not own that is used from Microsoft.

The number is calculated from the $330 million in app sales via Google Play Store. It is estimated that after expenses and revenues shared with carriers, OEMs and developers, Google makes about $2.75 per device per year, according to Electronista. 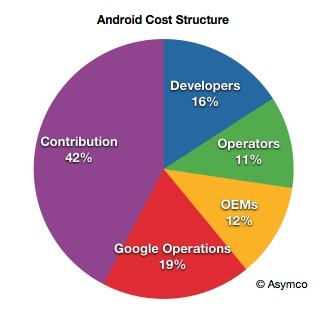 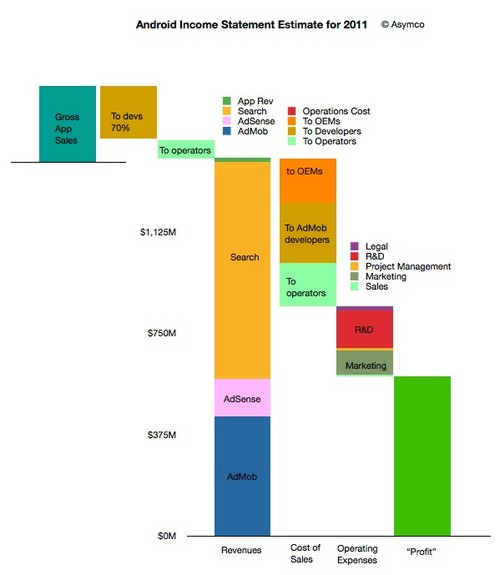 While the number may be small, Google’s intent is to grow Android’s user base. With a larger user base and more devices on the market, Android may contribute more significantly to Google’s bottom line in the future.

Even within the Android ecosystem, Google is facing competition from rivals such as Amazon. The online retailer has its own hardware–the Kindle Fire tablet–that taps into Amazon’s own digital ecosystem and thereby bypasses Google’s own Play Store. By doing so, Google essentially provides the underlying Android architecture for free for Amazon to use, but would not be able to share in any of the profits that Amazon makes when Kindle Fire users purchase new digital content, such as movies, music, books, and magazines as those content are processed by Amazon through its store.

The low revenue per device may also be a reason why competitors–such as Apple and Microsoft–have been going after Android hardware manufacturers, rather than Google, for Android’s patent and IP infringement. Microsoft is targeting individual Android licensees and not Google for licensing fees for patents that Microsoft owns that it believes Android infringes upon.