The new leak looks very similar to the previous Google Maps overhaul leak with a bigger emphasis placed on the Maps themselves with floating UI elements instead of static sidebars. This leak, however, shows off more of the features that will accompany the UI revamp. 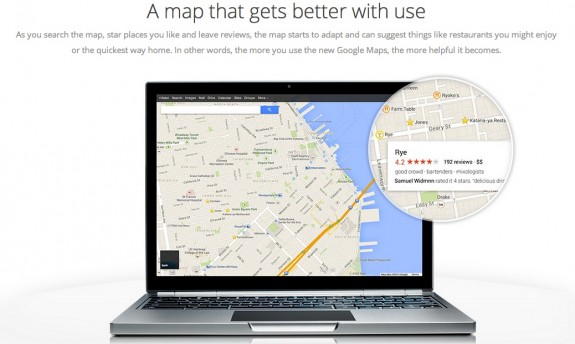 From Google Earth Google will bring the Earth View mode to the browser, giving users a new way to view cities around the world. A screenshot shows the new Earth View will work in any browser that supports OpenGL without a plug-in.

The smarter search bar in Google Maps floats on top of the map tiles, getting out of the way as much as possible. A search in the new search bar will display more information including destinations, ratings, reviews and even indoor maps in the search results. As shown in the previous leak, the new search bar will let users use their Google+ friends to find recommendations to find locations.

The page did not mention Android or iPhone in the overview of the new Maps, though they will likely make it to mobile apps sometime in the near future. If nothing else, the new Google Maps UI should work well in the browser on the iPad and Android tablets.