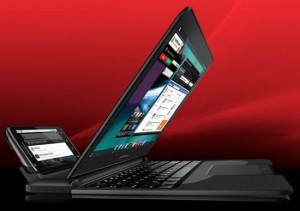 Google has already stated a number of things about its announced $12.5 billion acquisition of Motorola Mobility, including that Motorola wouldn’t be favored in making future Nexus products as well as other hardware partners in the ecosystem reacting positively to the announcement, but what we haven’t heard is how Motorola will add value to the Android platform moving forward to set Android apart from iOS, Windows Phone 7, and BlackBerry.

In the past, hardware-makers had to innovate on top of Android, both on the hardware and software side. HTC and others came out with their own user experience layers; in HTC’s case it was called the HTC Sense UI. On the hardware side, we’ve seen tablet-makers like Asus creating laptop docks that effectively changed a tablet into a notebook, as in the case of the popular Eee Pad Transformer. Motorola, which had its own secret sauce, created the Webtop OS, which was loaded alongside on some of the company’s Android handsets, and could be enabled when docked into accessories like the laptop keyboard dock or the home multimedia dock.

As Google is working on Chrome OS on the new Chromebooks, it’s unclear what the future of the Linux-based Webtop OS will be from Motorola’s lineup. Though Webtop on the Motorola Atrix 4G, which itself has a dual-core NVIDIA Tegra 2 CPU, was a clever idea and received a lot of buzz from media and consumers, the experience fell short and was a bit slow, despite AT&T’s 4G HSPA+ network. Given that Webtop didn’t support third-party apps aside from the photo and video viewer that was pre-loaded and a full version of Mozilla’s Firefox browser, perhaps the future of Webtop in its current incarnation may be phased out.

But that doesn’t mean that Motorola wasn’t on to something new, and perhaps something that may be groundbreaking. Carry a light smartphone when you don’t need power, and dock it to the keyboard laptop dock when you do need the extra oomph. That said, Google’s Chrome OS can fill the void with pizzazz as it does support HTML 5 applications and a full Chrome browser with Flash support would give users a bit more power while docked. Also, given that Google’s opening up Chrome to web app development, we can potentially see more app development with a Chrome OS replacing Webtop OS in the future.

Additionally, given that Webtop still relies on the phone’s connection to the Internet–whether if it’s through the internal phone cellular modem or through a WiFi connection–Chrome OS would be a natural fit alongside a smartphone or a docked tablet. If that happens, perhaps the future of Chromebooks will make more sense as it will become a natural evolution and extension of the smartphone ecosystem. As it stands, although the base price of a Chromebook is cheap–and certainly cheaper than Windows-based netbooks–the constant connection and potential need for yet another mobile broadband data plan may be prohibitive for some users to adopt. However, alongside an Android smartphone, it may help hardware-makers push not just phones, but the accompanying laptop dock accessories to make devices like Chromebook a reality. As Chrome OS operates in the cloud, the smartphone may be Chromebook’s best companion.