Ahead of when the BlackBerry Messenger, or BBM, app is slated to debut for Android customers tomorrow, September 21, Google’s Play Store already lists at least a handful of BBM apps. While there are always third-party knock-offs or similarly named apps listed in the Play Store many times, the situation with the BBM app highlights that the Play Store needs a better vetting, screening, and approval process for apps.

These fake BBM apps made by a single third-party developer shows up under multiple listings, often with different icons on the Play Store, both through Google’s browser web interface as well as on the Play Store accessed on an Android smartphone or tablet. 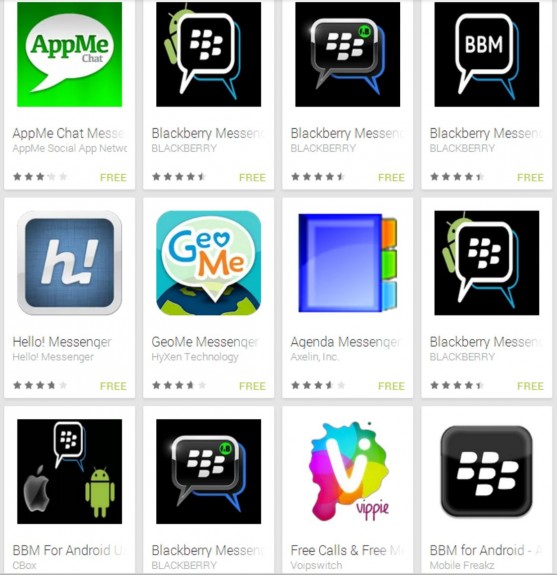 The deceptive part about these apps is that the developer publicly listed appears as “BlackBerry,” suggesting that these knock-offs originate from BlackBerry, formerly known as Research in Motion, whereas in fact the official BlackBerry BBM app isn’t slated to debut until tomorrow for Android customers and on September 22 for iPhone owners.

Furthermore, these fake apps are getting fake ratings, often with 4.5 stars or higher, suggesting that they may in fact be the real deal and offer a great experience.

While I haven’t downloaded the apps myself, some of the more honest negative reviews suggest that these apps do nothing and are ad-laden, which enriches the fraudulent developer’s wallets. I have no issues with ads in apps to support legitimate developing, but the misleading approach of this one developer should not be supported and Google really needs to manage the Play Store experience better for its customers. It’s unclear if these apps contain any malware inside them.

Google is more relaxed with its app approval process than Apple and the firm’s operation of its Play Store has resulted in malware, fake apps, and knock-off experiences in the past. Apple, which is criticized with being too controlling of its approval process, does not often suffer from similar problems.

Again, Android customers should wait until September 21 to download the BlackBerry Messenger service, which is similar to Apple’s iMessage, and iOS customers can tap into the app beginning September 22 according to a press release issued by BlackBerry.

BBM will be available as a free download for Android smartphones running Ice Cream Sandwich and Jelly Bean (Android 4.x) beginning at 7AM EDT on September 21. BBM for iPhones running iOS 6 and iOS 7 will become available for each market on the App Store schedule of 12:01 AM local time on September 22. For more information, or to download BBM for Android or iPhone, visit www.BBM.com.