Google Nexus 10 Back In Stock in Google Play

Google and Samsung’s Nexus 10 tablet is now back in stock after being unavailable in the Google Play store since before the holiday season.. 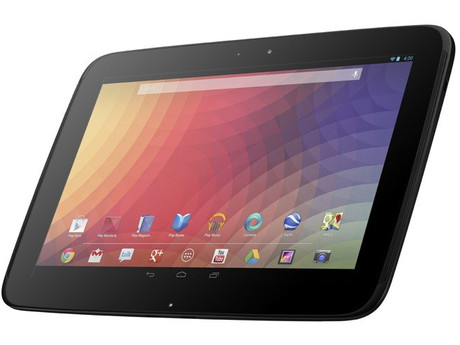 With Android 4.2 Jelly Bean the Nexus 10 uses a UI that’s similar to Android smartphones and the Nexus 7 with a row of virtual buttons on the bottom of the display and a menubar along the top. The OS also lets users have several accounts on the same device. The Nexus 10 is one of the few tablets that can have different settings and homescreens for different users, making it an easy tablet to share with family members without fear of them reading email.

Like other Android devices running the latest version of the OS the Nexus 10 can also use Google Now. The service is most useful on smartphones that users take with them everywhere, but the data from those smartphones will sync to the Nexus 10 as well. Because the data syncs the Nexus 10 lets users more of their Google Now cards at once.

Google advertises the Nexus 10 as a great tablet for watching movies and reading magazines from Google Play. The high-resolution display should make the tablet great for media consumption, but the tablet can fall short when it comes to apps. There aren’t many Android apps made for larger tablets. Most Android apps will show as stretched out versions of phone apps.