Google has updated its Google Search and Google Now application on Android to integrate search results with third-party applications. Now, when results are retrieved and delivered to the user, a button appears next relevant entries with the option that says “open in app” if you have the app installed.

For example, if you’re searching for a movie or an actor, results with that actor that are retrieved from IMDB would have an “open in app” button so that you can find more about the Hollywood search you’ve made within the IMDB app, rather than viewing the results in the Chrome browser in a mobile page on your smartphone. 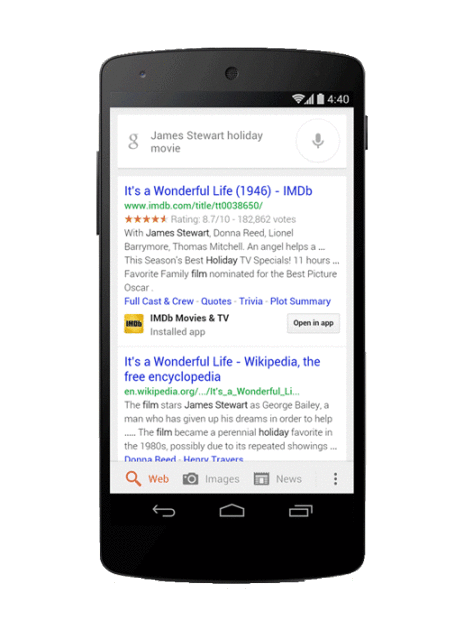 “You might get your trivia from IMDb, the box office stats from Wikipedia and ratings from Rotten Tomatoes,” Google said on its blog. “Google Search can make your life a little easier by fetching the answer you need for you — whether it’s on the web, or buried in an app.”

The tighter integration with third-party apps brings more value to the end user, though at this time the number of apps that are compatible with the new integration delivered by Google Search and Google Now are still limited, and Google is saying it’s just beginning the roll out now. As time goes on, we can expect more apps to be included with Google Search so you can retrieve search results and get more information inside the app, rather than on the browser itself.

Given that many–if not all–apps are designed with the mobile screen in mind, results delivered in the app would most likely be better suited. Though many websites have mobile versions that are optimized for the smaller smartphone display, not all websites have mobile optimized pages and users may have to zoom to read text and scroll to view a larger page on their smartphone screen. As such, bringing integration into third-party apps will not only attract more developers to create apps for Google’s platforms, but will also lead to a better experience to users of the platforms.