Remember Google’s ambitious plans to transform how people buy mobile phones over at Google.com/phone? Well, since those plans didn’t go so well, Google’s redesigned what used to be the Nexus One order page into an Android smartphone comparison engine. 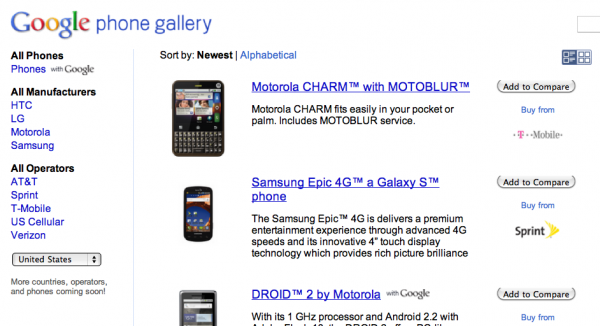 Those considering an Android device can now compare phones across different carriers and click through to purchase the hardware online from Verizon, AT&T, Sprint, T-Mobile or US Cellular. You can do the same in 15 other countries. Users can mix and match up to three phones to line up in a comparison table, which is interesting here in the U.S. since there are 22 Android phones listed at Google.com/phone from U.S. carriers. But things aren’t so interesting for Android fans in countries like Argentina and Mexico, which have one and two Anrdoid phones available respectively.

You can check out Google’s new Android comparison engine at Google.com/phone.