Here’s everything you need to know about Google’s new Pixel Slate and when you can buy one. This device is Google’s latest tablet and its vision for the future of Chrome OS. In a market dominated by the iPad Pro or Surface Pro 6, Google’s Pixel Slate is an exciting new tablet computer with plenty to offer.

Now that we’ve gone over the basics and highlighted some key facts, here’s everything else you’ll want to know.

In a surprise turn of events, Google’s Pixel Slate is available now for pre-order, with an estimated release date (and ship date) of November 22nd. That’s from both the Google Store and Best Buy. Initially, the company said it’ll arrive “later this year” but you can order it right now. 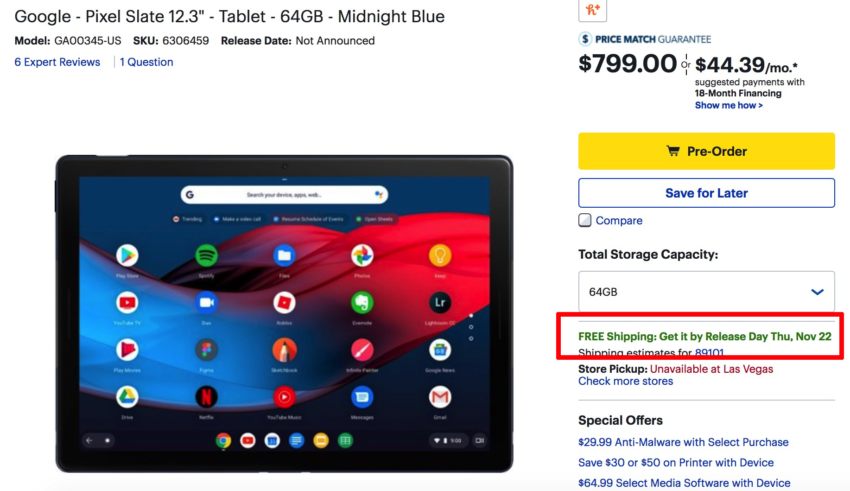 Soon you’ll be able to buy one starting at $599 from the Google Play Store, partner retail stores, and anywhere Chromebooks are typically sold. For now, here are links to get the Slate and some accessories.

For what it’s worth, Best Buy said it’ll ship with a delivery on November 22nd, the release date. Google’s own store says it’ll ship in 2-3 weeks. These dates are subject to change.

If this device wants to replace your laptop or compete with the Surface Pro 6 it needs some serious power under the hood. Thankfully, Google offers a slew of options along with a base package starting at $599. Here’s a quick and easy list of what to expect. 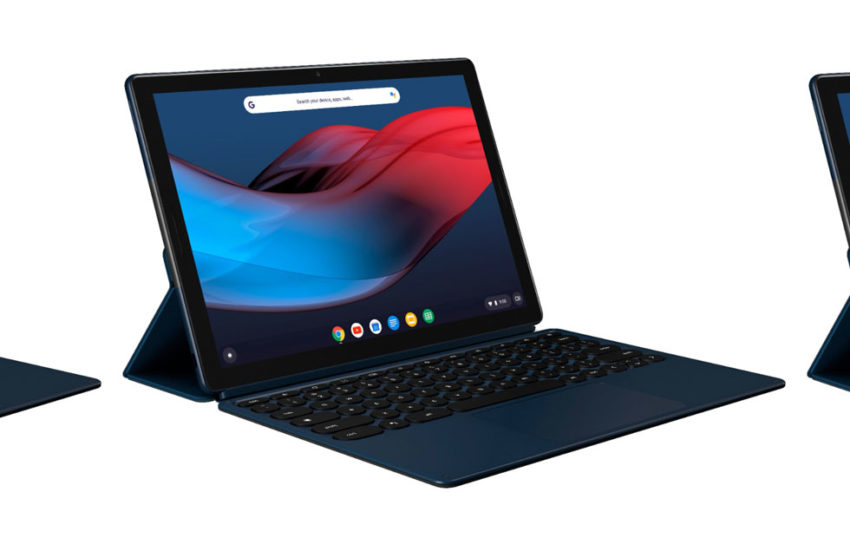 In a quick jab at the iPad Pro, Google made sure to mention that the Pixel Slate runs an all-new version of  Chrome OS. Software designed from the ground-up for this type of experience vs something like iOS blown up on a tablet. Basically, this is Google’s best tablet ever released, and the first one from the company in three years.

To make things simple for potential buyers, here’s a breakdown of what you’ll get from the $599 model and the other options available from Google.

The internal hardware and specs aren’t much of a surprise, nor is the display. They’re essentially the exact same thing you’ll find from the Microsoft Surface lineup, or even Dell’s XPS 13 2-in-1. That’s not a bad thing though, as you have more than enough options to find exactly what fits your needs. 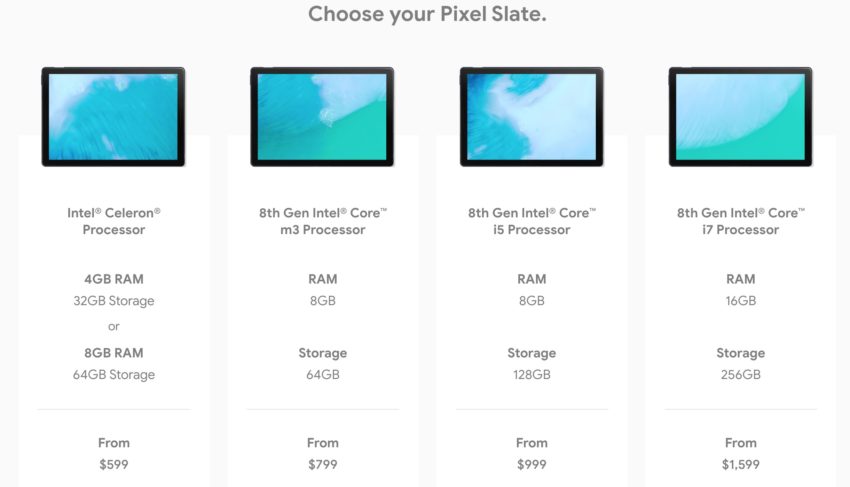 You’ll likely want a Pixel Slate with a little more power than the base $599 model, plus the prices mentioned above do not include the optional folio Pixel Slate keyboard cover and pen. Here’s a little more information on those for buyers.

The Pixel Slate Keyboard is $199 while the Slate Pen will run you $99. Expect a slew of 3rd party keyboards and accessories from popular manufacturers like Brydge, who offers an excellent keyboard that is hopefully more affordable than Google’s.

So far Google’s new Pixel Slate looks pretty great. It’s the first tablet from the company in nearly three years, not to mention adds Linux app support and fingerprint authentication to Chrome OS. However, we’ll have to wait for reviews and getting it ourselves before we say anything further.

And while the backlit keyboard looks great we’re not sure about those round keys that Google promises are extremely quiet.

Google’s Pixel Slate is only listed in Midnight Blue, and you’ll get three months of YouTube TV free with your purchase. As soon as we learn more or it’s officially released we’ll update this post with all the details.