Google is at it again promoting its new Nexus 7 tablet with the release of two new TV ad spots. Both which were released with perfect timing considering this afternoon Apple finally announced the new iPad and iPad mini will be revealed on the 22nd of October. With a few days to wait before we see what’s next, you might as well enjoy the new Nexus 7 ad spots below.

Not only did Google take the moment to steal a little glory from Apple, but these new ad spots are pretty excellent and pull right at the strings of users hearts. Following a recent set of videos all showing real usage scenarios the tablet will help with. Easily one of the best tablets around, Google is wasting no time showing them off with two brand new commercials. Puppies and all. 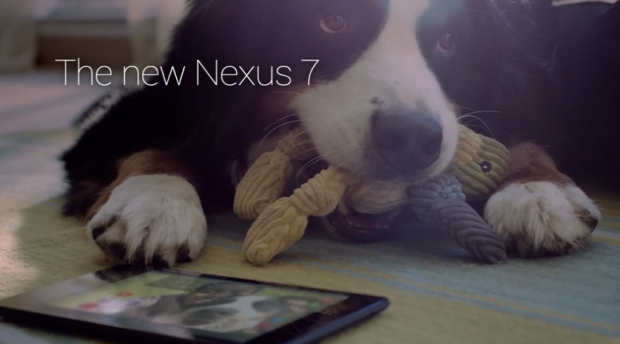 The first video shown below is the one pulling at users hearts and trying to connect with us emotionally. Showing Google hangouts for conversations with loved ones. Then ends by showing off the power of Google Voice Search and Google Maps for someone to get home to see the family, and a mans best friend, his puppy.

Google Now is taking priority in both of these new commercials. Considering it can tell you how long it will take to get home, if your flight has been canceled, and much more. The second video starts off with Google Now, but quickly transitions into the education scene. Something that Google is focusing more and more effort on lately. Education. Reminding the user it’s time to study, then using Google Now and maps to find a nearby location to get his study on.

These are just two more in a long line of recent Nexus 7 commercials by Google we’ve been seeing on TV. They don’t advertise much, but the Nexus 7 is getting plenty of airtime. Google looks to be set for some heavy Nexus 7 promoting all month long as we head into the holiday season. It will be a tight battle with the iPad mini, and Google is well prepared.