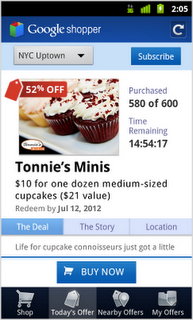 Currently, though, the daily deals and ‘offers’ are available only to residents of the Portland, Oregon, San Francisco area and New York City. In the future, Google promises integration with Google Wallet, so perhaps NFC integration will also be built into the app for compatible phones.

In addition to daily deals, also integrated with Shopper is ‘Nearby Offers,’ which are special deals that local businesses have submitted for ‘eat’ and ‘play,’ representing offers in the dining and entertainment arenas.

The latest update brings the Google Shopper app to version 2.0. The app requires an Android handset running Android 2.1 or higher to work, and is available for upgrade or a free download through Android Market.