Google’s rumored Google Play gift cards are real, the company just isn’t talking about the cards just yet, it seems.

According to the page, Google Play gift cards will soon arrive in RadioShack, Target, and Best Buy. The initial launch is U.S. only. Droid-Life says the cards are already in at least one Target store, so the cards are, in fact, on their way to stores as we speak.

Update: Google has officially announced the gift cards on Google+, users can now redeem the cards. 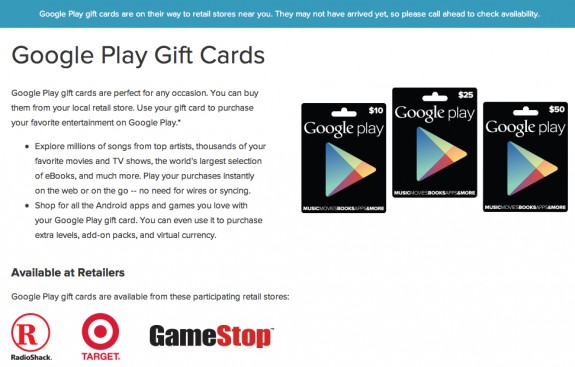 The Google Play gift cards come in $10, $25, and $50 variations, and users can only use them for apps, music, movies, and books. The cards will not work for “app subscriptions, magazine subscriptions, or hardware and accessory purchases.”

The Google support page for the gift cards explains how users can redeem the cards. The page says users can tap the menu button on their device and select “redeem” to input the code on their devices, though we can’t see the option on either the Samsung Galaxy S III or Samsung Galaxy Note 10.1. We assume a Google Play update will bring the menu option.

Users can also redeem codes online at play.google.com/redeem, but the link doesn’t work yet.