In under a week, Google is expected to showcase a new 7-inch Nexus 7 tablet at its Google I/O developer show with updated specs while keeping the attractive sub-$200 price point. The tablet is said to have a high resolution display, updated processor, and support for the Qi wireless charging standard.

According to KGI Securities analyst Ming-Chi Kuo, the new tablet will be headlining Google I/O with an updated Qualcomm Snapdragon S4 Pro processor and a high resolution WUXGA display supporting a resolution of 1980 X 1200 pixels. Kuo believes that Google will maintain its sub-$200 price point on the tablet–the current Nexus 7 retails for $199–and the company is believed to be losing $5 to $10 per slate sold. 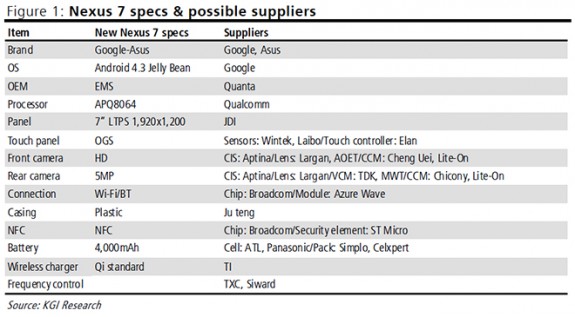 This should offer an incremental upgrade for the Nexus 7 over the current first-generation model. Kuo believes that the new Nexus 7 will appear ahead of Apple’s iPad mini 2 slate, which is rumored to be delayed until the fall. Despite the bump in specs, Google isn’t expected to grow its shipment of the tablet too much. The Internet giant is speculated to offer the basic model through its website while manufacturing partner Asus will be offering higher capacity variants through its own channels, according to a report on Apple Insider.

Kuo says that Android 4.x Jelly Bean will be used on the tablet, and not Android 5.0 Key Lime Pie. This matches up with current server logs revealing devices running Android 4.3 rather than Android 5.0, suggesting that Google may not offer a major upgrade to the OS at the show.

And in addition to the slate, Kuo says that Google is in the early planning stages of building an Android Book laptop and developing a smartwatch. Kuo doesn’t anticipate that these devices will be making their way to the Google I/O trade show at this time as they’re still in the early stages of development.