Today Google announced that Google Translate for Android will now offer offline packs for up to fifty languages so users no longer have to worry about Internet access for translation.

The free Google Translate for Android app offer offline language packs for languages such a French, Spanish, Arabic and Chinese among many others. Users will have to select the languages they want to download onto the device. To save space on user’s phones the app doesn’t automatically download any language packs.

The language packs will let users translate words or phrases between two of the installed languages no matter where they are or what data connections they have. 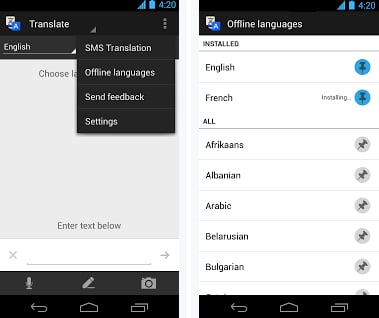 Google Translate supports more than 60 languages, which means more than 10 languages don’t have language packs, though the packs available should suffice for most users.

The Google Translate app is free and available to all Android users, and all users running Android 2.3 or above can download language packs so even older phones can benefit from the new feature.

The upcoming Samsung Galaxy S4 will include Samsung’s own S Translate app which may mean fewer people will need Google Translate, though Samsung’s app doesn’t support offline mode. Google’s app will help users save money on data, and will work in places with no data connection, like in an underground subway or while traveling overseas without a data connection.