The new Google Voice for Android update integrates Google Voice visual voicemail with the dialer app in Ice Cream Sandwich. Now users will be able to view all their voicemail in the same app on their ICS phones. 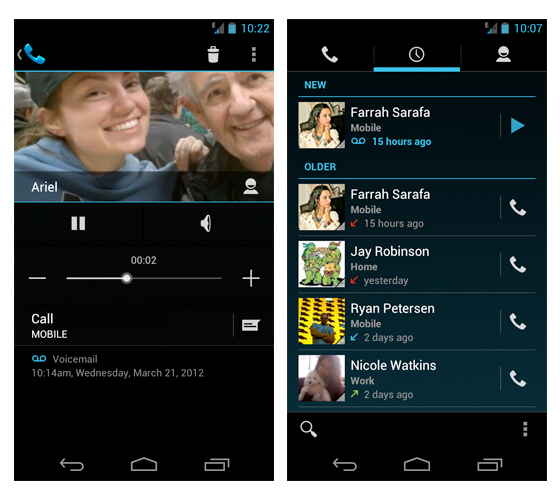 The other big new feature is the ability to speed up and slow down playback of voicemail messages. It’s great for making sure you don’t miss any details in the voicemail, or getting through long messages quickly.

The new version of the app also includes a UI update to Ice Cream Sandwich’s Holo theme. That means a lot of blue images on black, and a menu bar at the bottom of the app, just above the menu buttons on the Galaxy Nexus.

It looks a bit clunky, but it’s better than having the overflow button next to the multitasking soft-button. That means it’s ready for ICS phones that don’t use the software buttons, like the upcoming HTC One X.

To enable the visual voicemail integration you’ll need to download the app update, and select “voicemail display” in the Google Voice settings. Then just choose the option to display voicemail in the dialer app.

Via: The Verge and Google Play