Google is rumored to be working on a unified messaging client that would be used in Chrome OS and could potentially make its way to other platforms, including Android. The client, which is a pop-up from the notification tray inside Chrome OS, would unify notifications for Gmail, Google Voice, Google Talk, and Google Plus in one single arena. The move is similar to how Apple, for example, combines SMS, MMS, and iMessage into a single Messages app on iOS, for instance.

A screenshot was reported by Pocket-lint to have been posted to developer Francois Beaufort’s Google+ account, but has since been pulled. It’s unclear at this time if this in fact is an active project that Google is tackling, or if it’s an artist render or proof-of-concept solution. Whatever the case, it’s an interesting solution that has the potential to unify Google’s many disparate messaging and communications services. 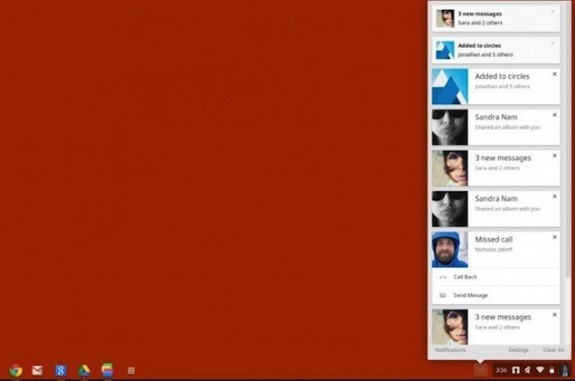 On Android, thus far, with the Google+ service, Google has already begun to unite some messaging services together, but the implementation is not exactly straightforward and could be confusing to new users. For example, you can access chat through the Google+ app in the Messenger section, or you can go to Hangouts to start a group hangout and perform video chat.

There’s also a separate Messenger app on Android for the same Messenger section of the Google+ app. Additionally, there’s a separate Google Talk app for basic included services for Android, though on the desktop Google Talk is integrated when you visit Google+ on the browser. Users can also add Google Voice as a separate download.

Rolling out a unified communications suite can help Google attract the attention and business of small businesses and professional users who may not want to pay for a professional web conference or teleconference solution. As part of a larger Google Apps service, this could help Google grab the attention of mid-sized and larger businesses as well.

The unified communications solution will likely compete with Apple’s FaceTime/iMessage and Microsoft’s Skype, which is getting integrated deeply into more of Microsoft’s platforms like Windows Phone and Xbox. On the consumer side, Google’s unified messaging solution will also compete against Facebook.