One of the more heavily rumored devices of 2013 is the presumed Motorola X Phone which has been tagged as the company’s first flagship of 2013. Rumors thus far have been all over the board and adding to it today is a benchmark that could be for the X Phone, a benchmark that points to the device as having Android 5.0 Key Lime Pie.

Over the past few months, rumors of a Motorola X Phone have heated up with an assortment of whispers in regards to Motorola’s presumed, HTC One, Samsung Galaxy S4 and iPhone 5 competitor. Reports have pegged the Motorola X Phone as everything from a superphone to a mediocre device featuring top notch software to a customizable device with over 20 colors to choose from.

This may or may not be a benchmark for the upcoming X Phone.

Release rumors have indicated that the device could be launched as soon as Google I/O and come as early as July. Motorola and Google have said they have devices for the second half of the year so July fits in perfectly. Other rumors suggest that the device will be delayed until August. So at the moment, the X Phone is all over the place.

Not helping matters is a AnTuTu benchmark that has emerged today, first spotted by Japanese language site RBMen. The benchmark refers to a “Google X”, not a Motorola X Phone or even X Phone, and lists a device as having Android 5.0.1. Android 5.0 is thought to be the moniker for Google’s next version of Android, Android Key Lime Pie.

It’s also listed with a 1.5Ghz processor and a benchmark score of 15479 which isn’t going to match some of the more powerful devices on the market but is nonetheless, decent.

While the information is interesting, at best, it’s unreliable. Benchmarks can easily be faked and often times, are inaccurate as far as the final release is concerned. So even if this is the real Motorola X Phone, the information here could be totally wrong. However, there is also a chance that this is completely accurate. We’ve seen benchmarks emerge, amidst skepticism, and be completely dead on. Case in point, early benchmarks for the Galaxy S4 which pegged Android 4.2 and a Exynos 5 Octa as being on board. 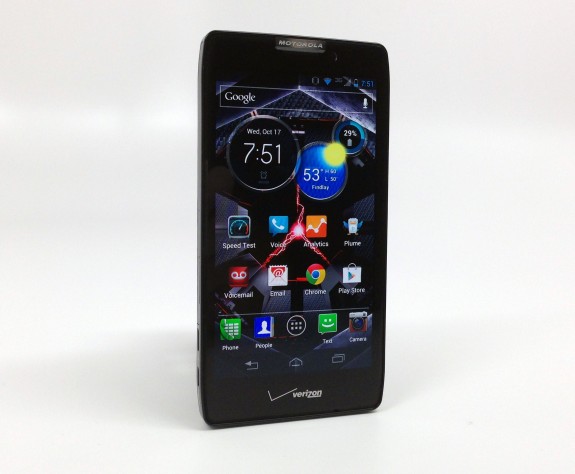 The Motorola X Phone is rumored to be replacing the Droid RAZR HD.

This benchmark though raises some questions. Android 5.0 still hasn’t been confirmed as the name for Key Lime Pie and there is still a chance it could be called Android 4.3 or something else entirely. It’s also odd to see it called Google X rather than X Phone though no name has been confirmed. The benchmark is also extremely low for a 2013 smartphone but again, we’ve heard that the focus of the X Phone might not be on hardware. In fact, a previous rumor even mentioned that it could have a dual-core processor.

All that said, while this benchmark has emerged, instead of answering questions, it has only brought even more questions along with it. And at this point, we aren’t exactly sure when Motorola and Google will answer them, be it Google I/O or later in the year.