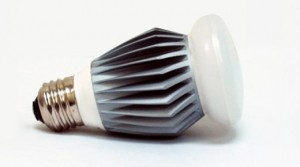 Google’s @ Home initiative announced at Google I/O makes some sense and sounds like a tinker’s delight and yet on the other hand it makes me wonder if this will have the feel of many of Google’s Beta roll outs. I would hope not. Gadget users will put up with Beta vagaries, heck, we’ll even spend bucks on Beta hardware if it is wrapped up and marketed as something news. But, I don’t think the home market will be as kind (or is that naive?)

In any regard, it looks like we’re seeing pictures of some of the early market light bulbs that will be available for @ Home. These are made by Lighting Science who promises there will be many more as this is all scheduled to begin rolling out at the end of the year. The early pictures (this one courtesy of Gizmodo) looks much like some of the LED bulbs you can already find on the market, and Lighting Science says this new @ Home equipment will be priced similarly.

Of course you will need and there will be some adapters that you need to plug in to your house to make this all work with Android and with the @ Home devices and gear. So, I think we have lots to learn about this down the road before we can get to excited by this. But the prospects sound intriguing.

So, here’s a question for GBM Readers. Does @ Home or other home automation of interest? Are you looking forward to being able to use your phone to control gear in your home? Let us know in comments.