Google had debuted a new minute-long video advertisement titled ‘New Baby’ for its Nexus 10 tablet that brings inspiration and emotional excitement as users follow a couple through their pregnancy. At this point, it’s unclear if Google will ramp up its television advertisement campaign for the Nexus 10 much like what rival Apple had been doing for the iPad and iPad mini and its chief partner Samsung is doing for the Android-powered Galaxy lineup. What is clear though is that the subtle features that are highlighted may be missed by the average consumer. And though the tear-jerking emotion of having a new baby may excite the average consumers, Google really needs to do a better job at highlighting why its user experience, products, and services are superior to those made by Apple, and even to the Android implementation made by Samsung.

Take for example the beginning of the video where Google attempts to highlight the new Android 4.2 Jelly Bean feature that brings multiple user profiles and log-ins to the Android tablet. Here, we see a lot of clicking and swiping, and the un-trained eye and non-tech consumer will not understand that there are very few consumer-grade tablets on the market that come with this unique feature.

Google+, Google Play Books, and Google Magazine were also featured in a subtle manner. Google didn’t really show its own branding in those products.

Google also highlighted Google Calendar as part of the features in the video. 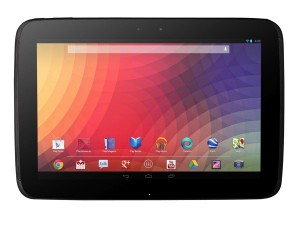 And then there is Google Hangouts for video chat where Google showed that video conferencing can be done via a web browser and the Nexus 10. Apple’s previous ads highlighting Facetime video chat capabilities add more emotional connection, and if Google really wanted to best Apple, it really needs to tell consumers that Google Hangouts can support up to 10 video feeds at the same time, which would be great to share the news of the baby with all of the couple’s friends and family.

And Google Now is just not demonstrated to anywhere near its capabilities. Apple really pulled out all the stops for its Siri commercials.

And last, you see the couple share a tiny photo of baby Alvin. That’s great, but Google should really highlight the photo and make a connection with the tablet’s insanely high resolution display.

Sure, the ad is clean and brings a sense of emotion as the user connects with the growing family, but it misses the mark on why users should choose the Nexus 10, Android, or even Google. For now, the video is still too subtle and non-tech consumers will probably miss over the a lot of the features Google is attempting to promote on the Nexus 10.