Google Glass, self-driving cars, augmented reality headsets, and wearable computing devices are just a few of the many exciting bits of technology that will likely shape the future, and today Google’s announced one more to add to the growing list.

Google originally debuted Project Tango back in February, announcing a new 5-inch Android smartphone that around 200 or so lucky developers will be able to access. This project is an attempt to expand our smartphones (and how they interact) beyond where their small displays end. An array of cameras, 3D sensors, algorithms and other technology is packed inside these devices and promise tons of advancements in the tech and health industry.

Without getting into what all these devices can do, and the creepy factor our own Warner Crocker alludes to in the link above, below is all the information on the just announced Project Tango Tablet. While it surely is an impressive device that could one day shape the mobile future, improve the life of the visually impaired, or even enhance video games and other activities for years to come, it’s also a tablet we as consumers all want but can’t have. 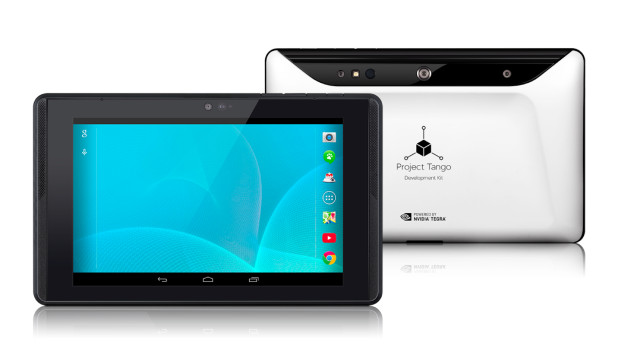 Today Google unveiled the new Project Tango Tablet as a part of Google’s (ATAP) Advanced Technology & Projects Group. A brand new tablet that will reportedly be offered to nearly 4,000 lucky developers to help Google and others understand the world and 3D environment around us, but from a mobile or technical perspective.

The awareness of space and motion is fundamental to the way we interact with our environment and each other, yet mobile devices assume the world ends where the 5-inch screen of your Galaxy S5 or smartphone ends. Google wants to change this. Using Project Tango Tablets developers can map our 3D surroundings and integrate our environment into technology, apps, games, or even maps for the visually impaired. There are tons of benefits here, but obviously we don’t yet know what Google has planned.

What’s perhaps more impressive about the Project Tango Tablet is all the specs and technology Google’s managed to pack inside it. If you thought the Samsung Galaxy S5 or the iPad Air was impressive, the Tango Tablet is what consumers should really want, but won’t be able to get.

Google’s new Tango Tablet is powered by a quad-core NVIDIA K1 mobile processor with 192-GPU cores, 4GB of RAM, and 128 GB of internal storage. Obviously you’ll need plenty of space to map environments and record your surroundings, but still, it’s impressive nonetheless. The 7-inch HD display is accompanied by 4G LTE, WiFi, Bluetooth, multiple cameras for image and 3D capture, sensors for depth perception, and advanced sensor fusion algorithms to help the device understand space and motion like a human. Scary stuff right? That aside, playing games that integrate all those features to bring us a life-like and immersive experience unlike anything else sure would be fun, and something we can expect in the coming years as this project continues to move forward.

When it comes to consumer-grade tablets this is miles ahead. With the Nexus 7 and other Android tablets having 1-2GB of RAM, and usually rarely over 16-32GB of internal storage, this sounds like a dream device for millions of consumers. Sadly that isn’t possible, and instead only a few lucky developers will be able to take advantage of Project Tango. At least for now.

Google I/O is an annual developer event where we can expect Google to announce more about Project Tango, and how they see it changing the mobile world and landscape. Developers will help create apps, uses, features, and benefits that will allow these devices and sensors to improve and expand the mobile future.

Whether society and our gadgets, mobile games, or even the health sector can benefit from Tango all remains to be seen. I just want to get a Tango Tablet to use with a 3D printer for some fun. Imagine the possibilities.

Project Tango Tablets will be seeded to lucky developers later this year for a little over $1,000 each, and you can head to the ATAP site now for more details and the sign up page.