Anyone ranking the best Android phones of the first half of 2014 must include the HTC One M8 near the top of the list, but it comes with one problem we need solved: the battery leaves us wanting (even though its still better than the older version of this great phone). Since users can’t swap in a larger capacity battery like they can with a Samsung Galaxy S5, they have to pay attention to battery life.

Follow these tips to get the most life out of the HTC One M8 Battery. 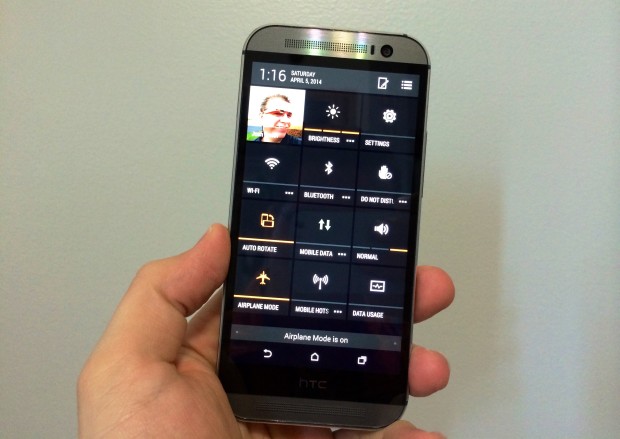 Here’s how to access HTC One M8 settings quick, and customize them.

Please see How to Add Qi-wireless Charging to an HTC One M8.

Dig Into the HTC One M8 Settings to Reduce Battery Usage 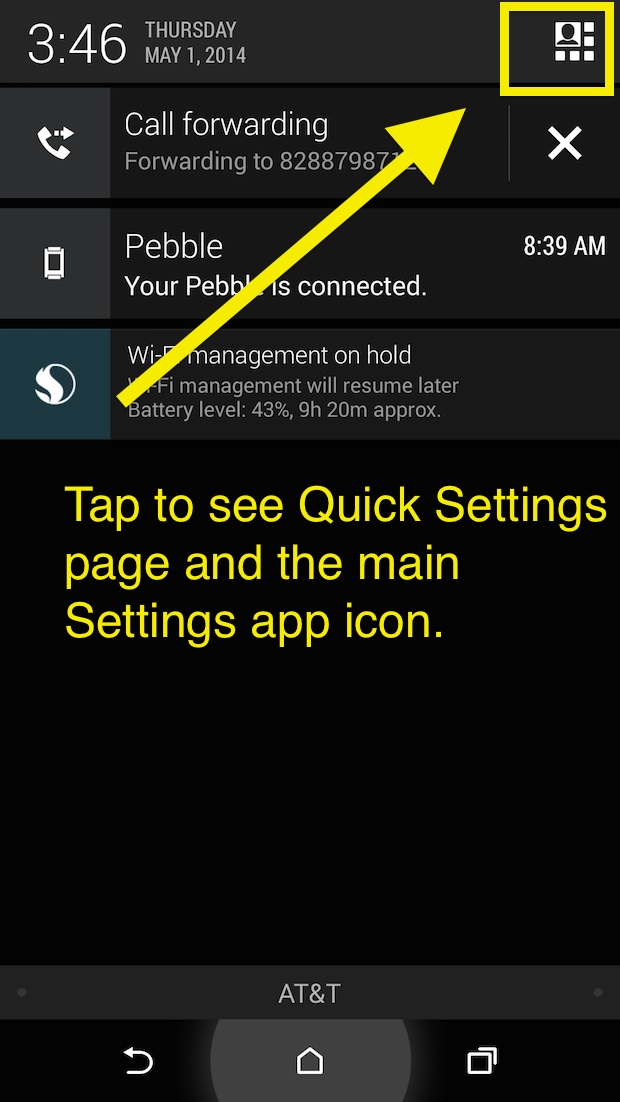 The HTC One Sense interface lets users quickly access settings by swiping down from the top edge of the screen and tapping the icon that shows the grid of settings shortcuts. It’s in the upper right corner and looks like a square with a tiny silhouette of a head and five smaller squares to the right and below (see above).

A slew of buttons show up on a grid while the main Settings app sits in the upper right corner of the grid. Users can also open Settings from the App Drawer, the center button on the dock at the bottom of the screen. The icon looks like a 3×3 grid of tiny squares.

To quickly grab some quick battery savings, swipe down and tap on the icon with the little head and squares. Tap on one or all of the icons mentioned in the bullet list below to reduce battery usage. Hold the icon down to open the main Settings app screen for that setting item. Opening the full Settings app gives more granular control over these settings. We’ll discuss how to save battery life using the main Settings later. 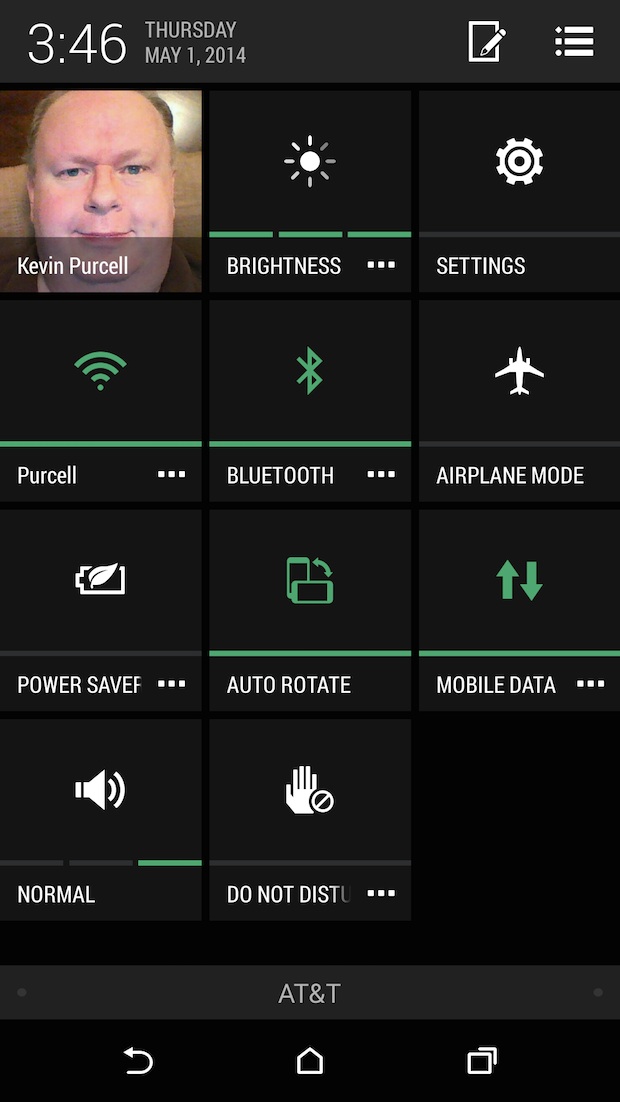 Most of these icons will help save some battery life.

Here’s the list of things to change from the quick settings screen.

Turn off everything that you won’t use. When the phone gets below 30% turn off most of the above features until there’s an outlet accessible, unless the day’s about over. Thirty percent usually lasts about three hours under normal usage.

More Settings that Save Battery Life

Here’s a few more ways to save some battery life. None of these alone will help the battery run for hours longer, but combined they might extend battery life to get a user through the day. 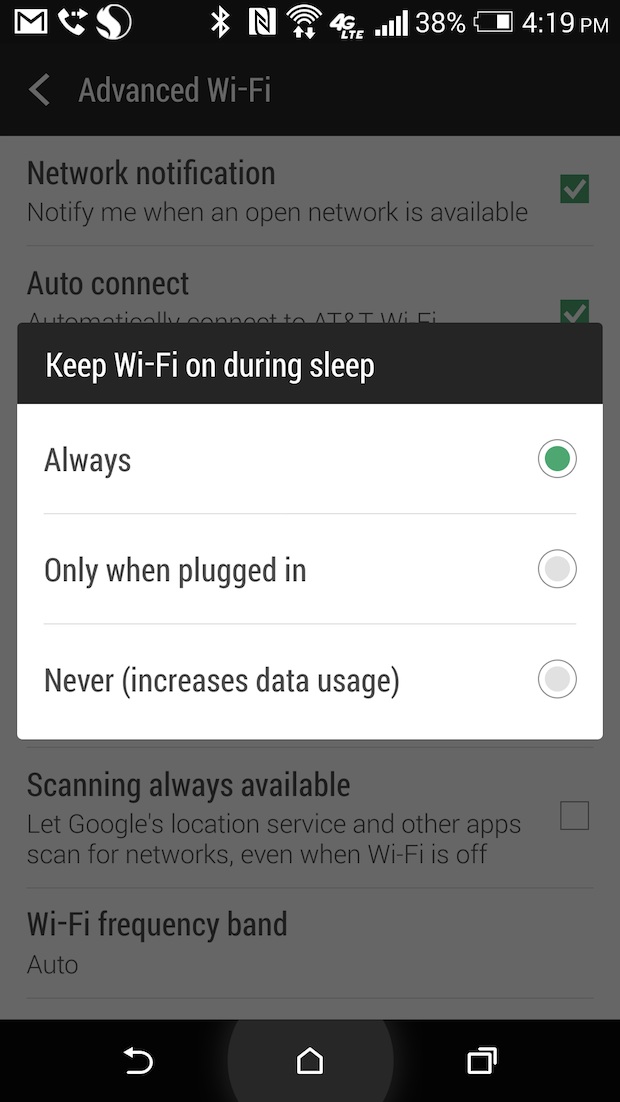 Change some Wi-Fi settings by opening Settings and tapping Wi-Fi. Don’t tap the On/Off button but the word Wi-Fi.

Tap on the menu button in the upper right indicated by three vertical dots.

Tap Advanced from the menu that pops up.

Now choose Keep Wi-Fi on during sleep. A screen pops up with three options (see above). Leave it to Always for the most normal function or tap on Only when plugged in to reduce battery usage when the phone’s screen turns off. This also means the phone will take a few seconds to reconnect to a Wi-Fi network, so change it back to Always if it becomes annoying. Choosing Never (increases data usage) means that the phone will turn off Wi-Fi every time the screen turns off. This can dramatically increase the amount of cellular data a person uses. If you select this, be sure to turn off automatic app updates in the Google Play Store.

Before leaving the Advanced menu in the Wi-Fi settings from above, be sure that Wi-Fi Optimization is checked. The HTC One M8 defaults to checked, but make sure it didn’t get turned off. 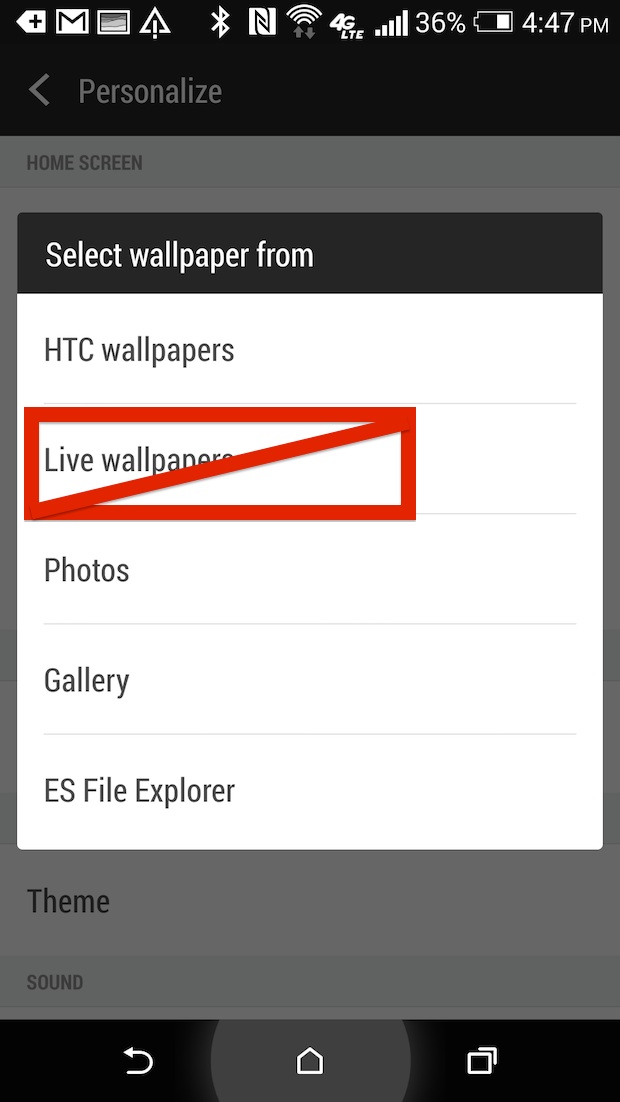 Don’t use a live wallpaper since it eats up more battery life.

Go into Personalize from the Main app screen. Tap on Home Screen Wallpapers and use a static photo instead of one of the Live wallpapers. Do this by choosing any of the other options from that screen and pick an image.

Location settings will eat up battery life since it keeps the GPS sensor on, so go into Location from the main Settings app screen. Tap on the On/Off button in the upper right to turn it off.

The phone’s screen uses more battery power than anything else, so keeping it off as much as possible helps lengthen battery life. Shorten the Screen timeout to lower battery consumption. The Screen timeout describes the time it takes for the phone to turn off the screen automatically when it’s not in use. 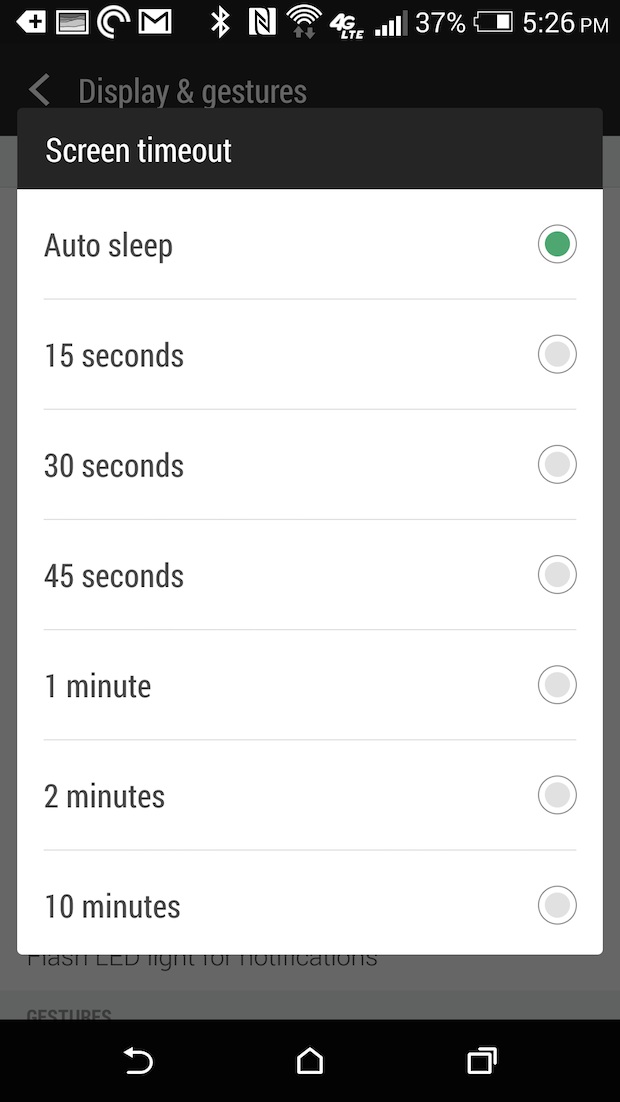 The Auto sleep mode turns of the screen only when the phone senses no movement. Wave a hand over the screen to keep it awake. Choose 30 seconds for the best mode for saving battery power.

From the main Settings screen open Display & gestures. Tap on Screen timeout. Select a shorter time from the list. Choose the shortest time to save the most battery life. I prefer 1 minute, which balances battery savings and not turning the screen off too quickly.

The Auto sleep mode will turn off the screen quickly, unless the user waves their hand over the screen. The phone senses the movement and keeps the screen turned on. 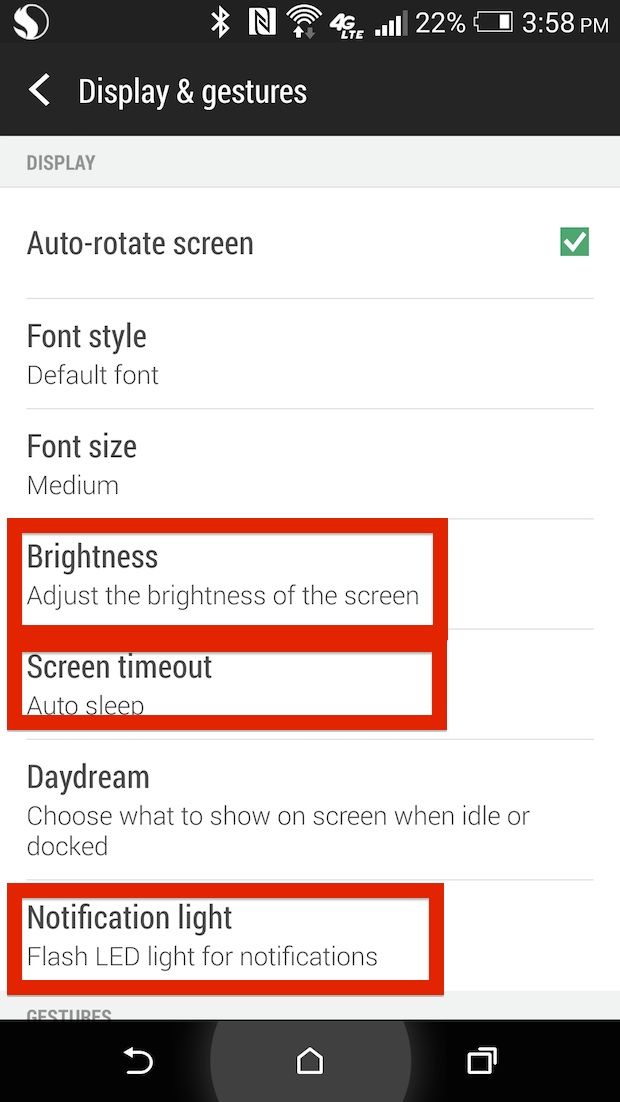 From the same Display & gestures screen, choose Notification light. This controls what turns the little LED off and on. Deselect anything that’s not important. This won’t save much power, but every bit helps. 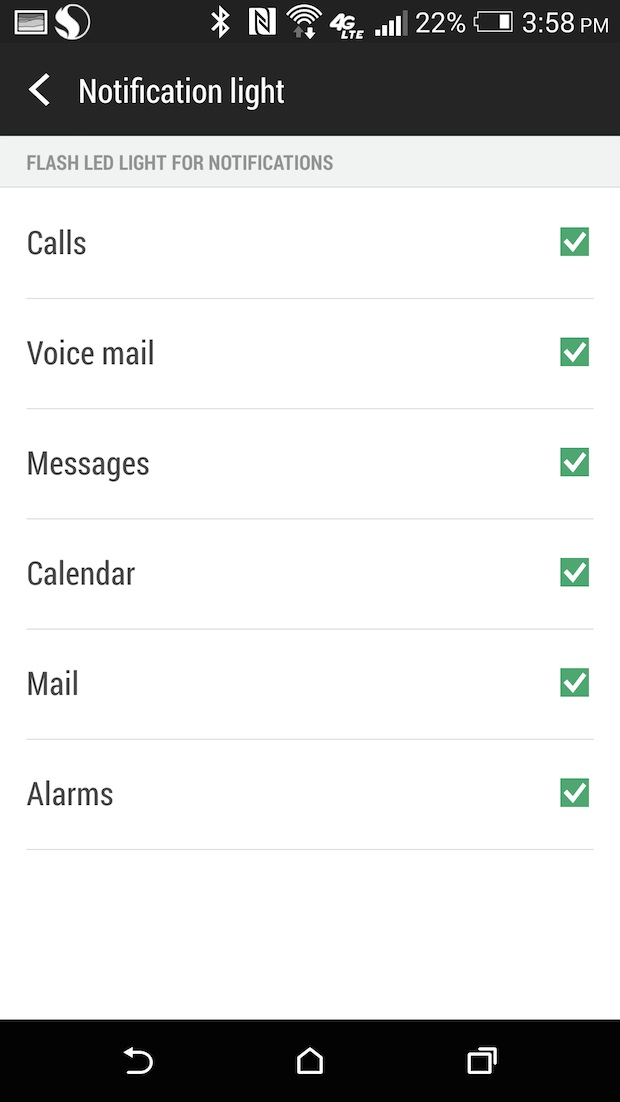 Uncheck these to save a tiny bit of battery life.

The HTC One uses a function called Motion Launch gestures which the finds in the Display & gestures section of the Settings app. Go into this section of settings and turn these off for a minimal battery life savings. It won’t give the user much, but it will help a bit.

On the main Settings app, choose Sound. First, turn off the Vibrate feature third from the top. Then scroll to the very bottom of the screen and deselect Vibrate on touch to turn off the feature. The vibration feature uses a tiny amount of battery life. 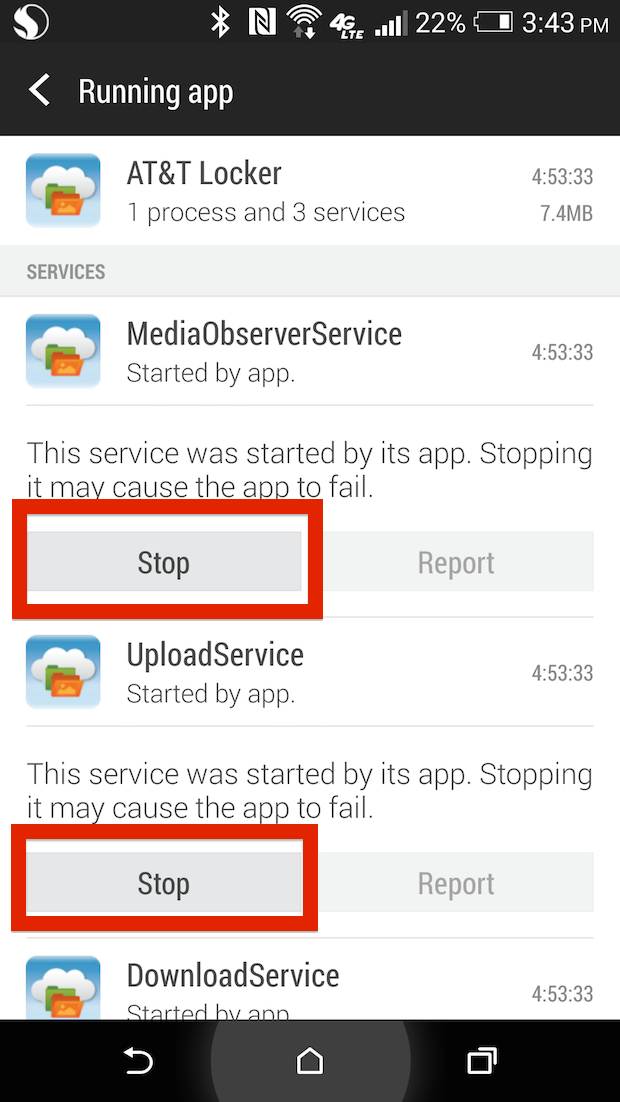 To temporarily stop an app, open the app settings from the Running apps list of the Apps section in Settings.

Apps running in the background can eat up some battery life, so from the main Settings screen, go into the Apps section. Swipe left twice to show the RUNNING apps. Find apps that you don’t use and tap them and then tap on Stop for any service listed there. Unfortunately, these apps will come back the next time the phone reboots or if the operating system thinks you need them. To fix this, go back to the main Apps screen and swipe to show the DOWNLOADED apps list. Find the app you don’t want running at all and tap on it. Then tap Force Stop and then Disable if the app was pre-loaded on the phone by HTC or by the wireless carrier. 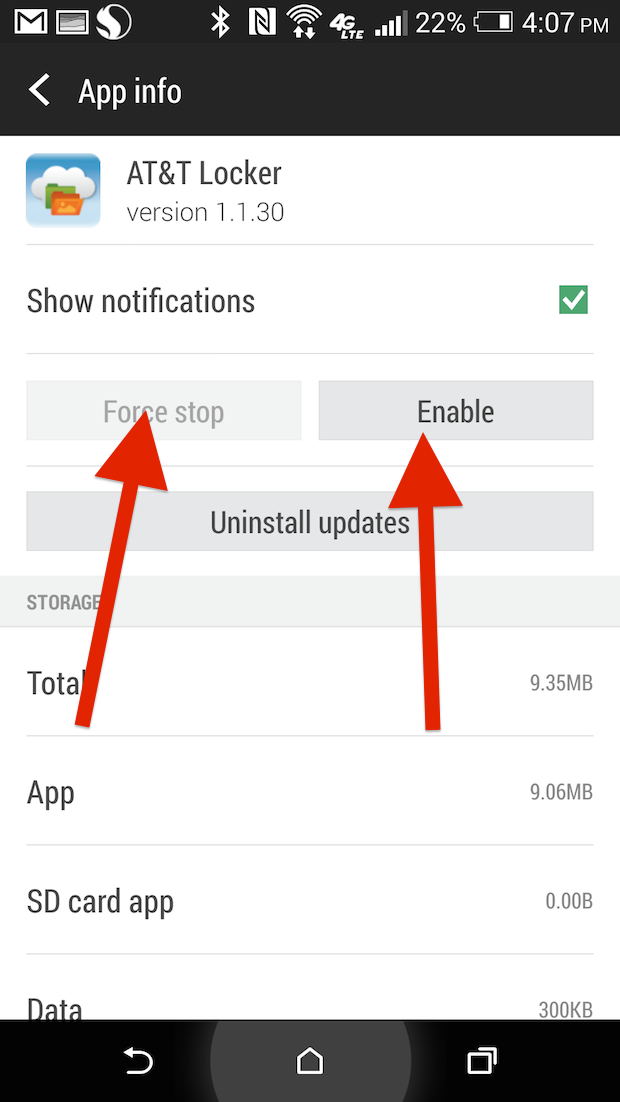 Top on Force Stop first and then Disable (this one was already disabled) to stop an app from running in the background.

An example is the AT&T Locker app. This app will store settings and backup files up to 5GB for free. Since I don’t use it, I disable it. AT&T or HTC won’t let the user uninstall these apps. However, if the user opens the App drawer by tapping the grid of 9 tiny squares at the bottom center of the screen, they can tap and hold on one of these kinds of apps and drag it up to the Uninstall link. The phone tells the user this will remove the app icons from the screen and gives instructions for re-enabling the app from the App section of Settings. Just reverse the instructions given in this paragraph. 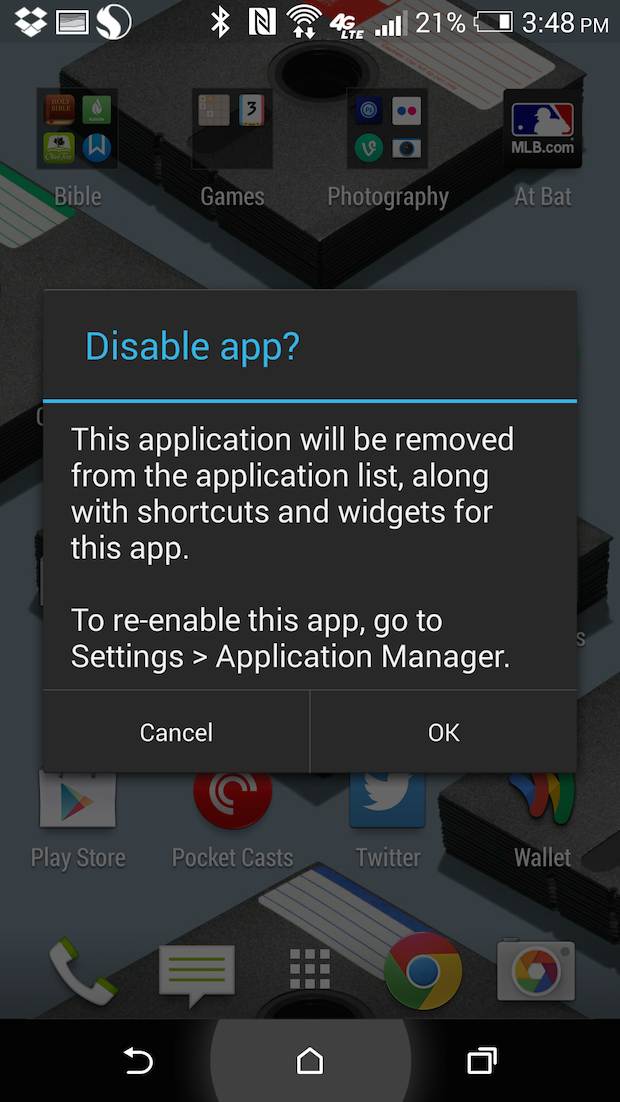 Tap on Disable from the app’s listing in Downloaded apps of Apps section in Settings.

The biggest battery savings comes from the Battery Manager section of Settings. Tap it to open the manager. First tap on Power saver, the words at the top of the list below the battery image, and not the On/Off switch to the right, and check all or some of these options. Each one, when checked, will aid in saving power. Go back and now enable this option by tapping the On/Off switch on the right. 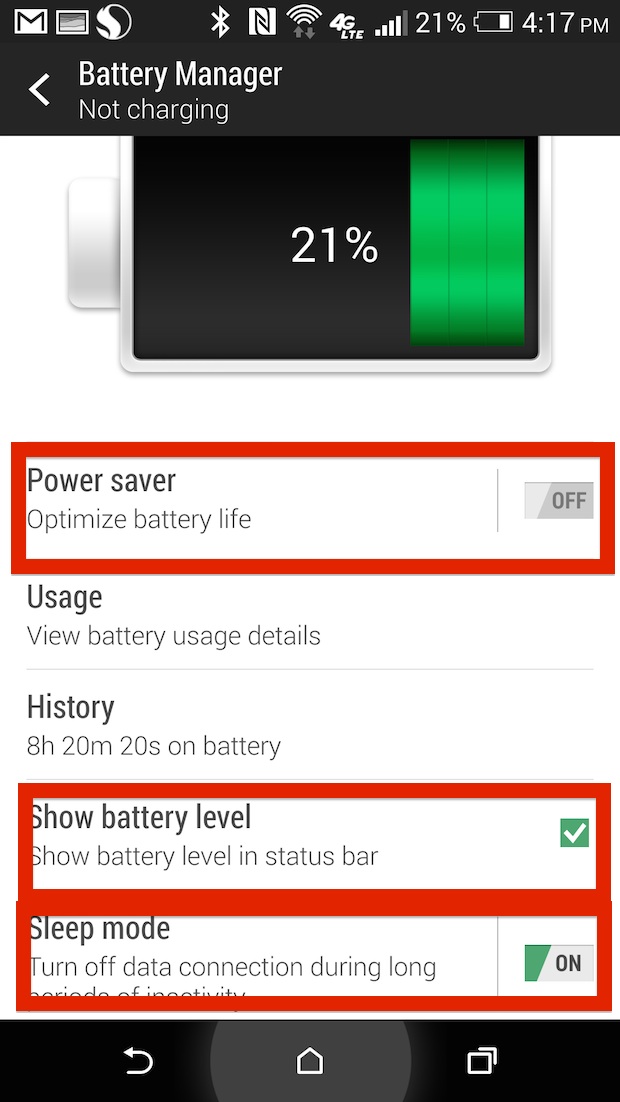 Use the three options here to change the Power saver settings. Turn on Power saver and Show battery life to know when the power hits critical levels and turn on Sleep mode to save more power when the phone’s not in use for long periods of time.

Also turn on Sleep mode which turns off the data connection when the phone is sleeping for a long period of time. After turning on Sleep mode, tap the name to show more settings. A check mark turns this to automatica based on the user’s usage of the phone. To get more manual control, uncheck it and set a time to start Sleep mode and end Sleep mode.

Also turn on Show battery level to turn on the icon in the status bar will help keep the user apprised of the battery level so the person can make changes to any of the above settings to get more battery life when desperately needed. When a peson turns this on, the percentage left in the battery will show up near the battery icon next to the time at the top of the screen.