According to the latest Gartner predictions, Android will be command nearly half of the smartphone market in 2012, with 49% of new smartphones sold next year to come pre-loaded with the Google operating system.

The overall smartphone market will increase by 57.7% from this year’s market, with sales to reach 468 million units in 2012. Android will be the most popular mobile platform by the end of 2011, according to Gartner. 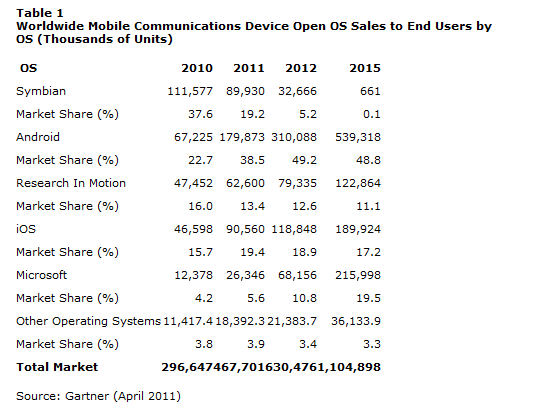 Though the numbers differ, Gartner’s predictions are in alignment with IDC. Both predict that Windows Phone 7 will take the number 2 market share spot by 2015 thanks to a partnership with Nokia, the world’s largest phone-maker.

One of the reasons that Apple may not be able to grow as strongly as Android may be due to price, despite the popularity of the iPhone. However, Apple has said before that it intends to tackle the low-cost phone segment, though the company has not disclosed any strategy on how it intends on doing so.