Yesterday I met with Fusion Garage CEO Chandra Rathakrishnan to get my first in-person look at the Grid10 tablet. This product comes with a lot of baggage attached to it. There’s the whole Crunchpad/Michael Arrington diss, the poor sales and performance of the JooJoo, plus the fact that Fusion Garage is a small startup jumping into a tablet market full of much bigger players.

Is it possible to put all of that aside and look at the Grid10 with fresh eyes? That’s what I tried to do today. I came away thinking that the tablet has the potential to avoid mistakes that have taken down bigger players and their devices, but that doesn’t mean they can’t still stumble. 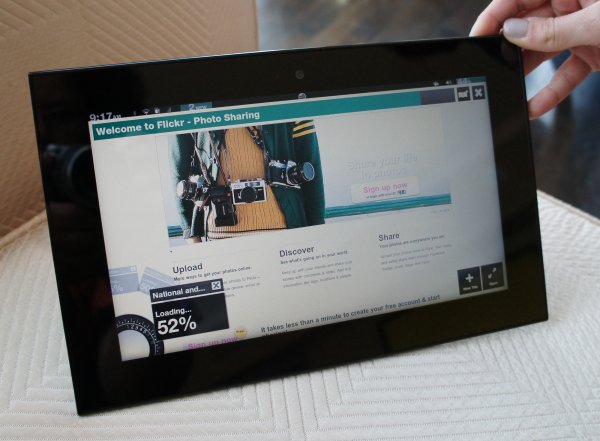 This is one area where many tablet makers fail and fail hard with crappy looking hardware that doesn’t feel good in the hand. You can’t discount that last bit: how it feels to hold it. Apple certainly didn’t.

So kudos to Fusion Garage for designing a nice looking tablet that’s not too heavy and is comfortable and pleasant to hold. Going with simple and slick, the Grid 10 has a nice taper to it on the short edges and a smooth glass front. The back is made of aluminum with the name/logo imprinted in the center. Minimal buttons — just power and volume on the left. A proprietary port and microSD card slot sit on the other side.

At 1.6 pounds it’s heavier than the iPad 2, but not egregious. I can imagine holding it with one hand/arm for a moderate amount of time. 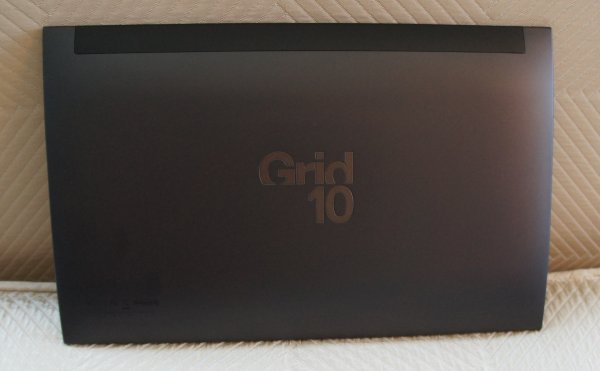 What makes an impressive mobile operating system these days? It has to look good, of course, and it has to be easy to use and understand. During the demo I found the GridOS passed both of tests for me. However, I’m also not exactly the average user. What I find intuitive may still baffle mainstream users. 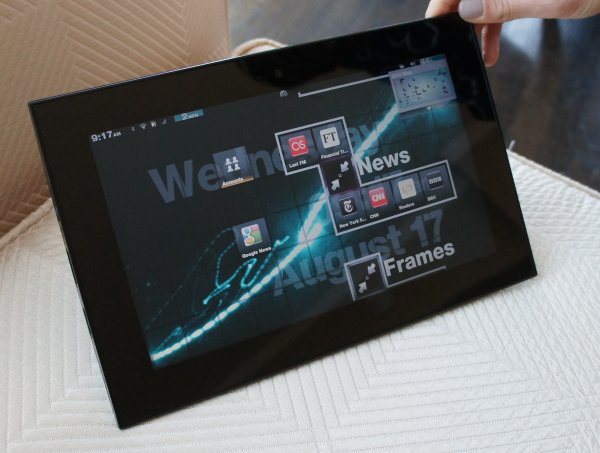 Take the GridOS Home screen — Rathakrishnan likened the organization here to that of a coffee table. It may seem cluttered and disorganized from the outside, but if it’s your coffee table you know where everything is.That metaphor works, but only for certain types of people. I thrive in organized chaos, but some people lose their keys if they’re an inch out of place.

I like that the Home screen is infinite and will just continue to grow as users add apps. Say someone goes crazy and downloads 100 apps. It’s easy to imagine the grid getting unwieldy and hard to navigate. Two things can keep this from happening. One is the Grid Map that sits in the upper left corner giving a thumbnail representation of the entire Home area. That will be familiar to gamers, at least.

Also, users can arrange apps in named clusters — Media, Browsing, Shopping — and can shape those clusters any way they like. Rathakrishnan told me that the son of one of the team members decided to make the clusters resemble a giraffe just because he could. Making each cluster a different shape is fun and will help with memory.

That’s nice and fun, but I wonder if mainstream users will even get that far or if they’ll end up at “Where’s my app? Where’s the browser? Where did I put that shortcut?” within a few hours.

Another aspect tablet makers often discount is how much stock consumers put in things that are simply beautiful for the sake of being beautiful. Stock Honeycomb is easy enough to understand, but it is not beautiful.

Fusion Garage spent a lot of development time focusing on the eye candy aspects of the design. The transition animations between apps and when switching orientations are visually appealing and smooth. Plus, they continue the grid theme, with blocks falling into place or swirling away. And I admire the design sense inherent in everything from the media player and controls to the browser. The default backgrounds could use a little help, though.

In the demo, Rathakrishnan kept returning to how smoothly the tablet executes zooming in and out. Even if you increase text or an image by 400% the tablet doesn’t need a second or two to rerender at the new size, it’s instantly available and readable. Little things like that aren’t only impressive, they provide an excellent user experience.

It’s Not Android, Except When It Is

From the start, Rathakrishnan has emphasized over and over that the Grid10 is not an Android tablet in order to position it as something different (and better). But GridOS is built on top of the Android kernel. From a programming standpoint, this is a valid distinction. But mainstream consumers don’t really understand about kernels and Linux. All they’re likely to understand is that it runs Android apps, so it’s some kind of Android tablet. And that gives it an edge.

Back when tablet makers were going to open source Android route (a whole year ago; i.e: forever), one of the biggest barriers to consumer adoption was lack of apps. Honeycomb has solved this problem somewhat, but the issue still plagues BlackBerry and HP/Palm. Nevermind that users will never see, need, or use 95% of the hundreds of thousands of apps available to them, everyone insists that those apps are necessary and no one can live without them.

Even though the Grid10 isn’t a Google-sanctioned tablet, it still has access to a high-profile Android app store: Amazon’s. And unlike the other third party markets out there like GetJar, Amazon has brand recognition and a trust factor.

I imagine consumers asking “Is this Android?” and someone saying “It runs Android apps,” and that being good enough. If the consumers in question know enough to ask “How do I get Android apps?” the answer of “From the Amazon App Store” is enough to calm most mainstream minds. They know the brand, so it’ll be just like buying books on the Kindle, right?

Fusion Garage gets all the benefit while still being able to say they’re different and new. And they don’t have to ask consumers to wrestle with hard-to-understand app stores they know nothing about.

At the end of our meeting, Rathakrishnan asked if I was still skeptical about the Grid10 now that I’ve seen it. I said yes, but only because sometimes you have to use a device for several days before really discovering the things that either make you want to keep it forever or throw it across the room.

I did say that, from what I’ve seen, the Grid10 has promise. The hardware is slick, the user interface and animations fun, and the speed acceptable. That it runs Android apps is a big bonus. How well it runs those apps is a more important concern (and you bet I’ll be testing).

Let’s say that the company manages to deliver the Grid10 on schedule (it’s slated to ship September 15th) and that production units work even better than the units they demoed for me. Keep in mind that both small and large companies have failed this first step. But say the Grid10 launch goes well and early consumers and reviewers are happy with it. That doesn’t mean it will succeed.

Then the company has to get the tablet in front of consumers who don’t follow tech blogs or obsess over every new device on Earth. Selling through Amazon is a good start (you can pre-order there today), but not enough. Rathakrishnan said they were in talks with retailers about getting the Grid10 in physical stores. Plus, they need a good marketing and advertising campaign that goes beyond hipster irony and tech blogger inside jokes. Get that all going before the holiday shopping rush hits and Fusion Garage may have a chance to at least make a decent showing.

The baggage I mentioned before isn’t going to matter much to your average Best Buy-shopping consumer. Honestly, how many mainstream shoppers even know about the Crunchpad or even the JooJoo?

Review units were promised for close to launch, so expect something from us mid-September. Given what you’ve seen and read so far, are you willing to give the Grid10 the chance to impress you?