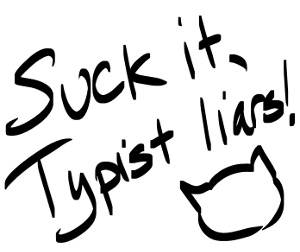 A study finds that people are more apt to lie in typed emails than in handwritten letters. That can only mean one thing: I, the father of ink blogging, am the most honest blogger on the Internet. Suck it, typist liars!

Okay, that was a lie (but look how forthright I am about that), but it illustrates how open to interpretation the results of this study (Naquin, Charles E.; Kurtzberg, Terri R.; Belkin, Liuba Y. The finer points of lying online: E-mail versus pen and paper. Journal of Applied Psychology. Vol 95(2), Mar 2010, 387-394.) can be.

For one thing, the differences between email and pen and paper are more than keyboard vs. pen. It’s not just typing vs. handwriting, but screen vs. paper, editable vs. permanent, cyberspace vs. meatspace. Do one of these factors lead to the discrepancy in honesty, or is the confluence of these factors required?

As a Tablet PC user, I cannot honestly say that I am no more honest when writing an email vs. typing it (though that could be a lie since I’m typing this entry). However, on a tablet I’m not constrained by the hard limits of paper. When I make a mistake, I can scratch it out entirely, while ink on paper always leaves a mark, even if its an eraser mark. If you hesitate, such as while writing a lie, the paper betrays that. I have to wonder if they’d get the same results if they compared email to typing on paper.

Furthermore, the authors note in their abstract that both email and pen and paper “are equal in terms of media richness, as both are text only.” That’s simply not true. Assuming the subjects were limited to verbiage, no doodles allowed, there’s no way to stop the subtle messages communicated in handwriting. A word typed on a keyboard looks the same no matter who typed it and under what circumstance, while handwriting conveys emotion and attention, non-verbal elements beyond simple text that may sway the writer consciously or subconsciously. In fact, I just put out an open call for handwriting analysts to tell me what they think of my handwriting.

This brings us to the difference between sending messages out via the Internet vs. through the physical world. As we know, people behave differently online than they do in person. Many people post things online they’d never say in person, while some go in the opposite direction. There’s a different sense of morality in cyberspace. Email is tied to that, while pen and paper are “real world”.

So unfortunately, while it would be nice to infer that handwriting is a more honest form of communication than typing, the study does not pave a concrete path to that conclusion. There are several other factors at play. Handwriting is only one of them. Trust the judgment of the world’s most prolific handwritten blogger… or not.