While the new Nexus 7 is getting rave reviews for its new design and hardware improvements, it looks like Google and Asus still need to work out kinks with the new 2013 tablet. After we had reported about a GPS bug , it looks like there may be a glitch with the touchscreen.

We had previously reported of a highly sensitive touch panel as a potential dealbreaker for the Google tablet, but it now appears that the problem may be worse than we had originally believed.

On Google’s online product support forum, here’s what one user wrote about the touchscreen issue:

At first the keyboard seemed okay, though it would occasionally register double presses on the keyboard.  Now it has gotten progressively worse and the keyboard getting very erratic.  It is frequently registering double taps, and often ghost taps in areas not anywhere near where I’m touching on the keyboard.  It’s almost to the point where it is unusable.

A reboot seems to offer a temporary remedy for some users, though as many in the forum noted, the issue “gets progressively worse” as the device gets used over time.

The issue is also documented on support forums on XDA-Developers as well in several different threads.

Here’s what another user had noted about the tablet’s problematic touchscreen behavior, which may be a grounding issue.

My second nexus 7 only acts up if it’s laying on a non grounded surface (coffee table, couch etc). As soon as it’s in my hand it seems to work fine. I’m still not really satisfied with a partially messed up tablet. 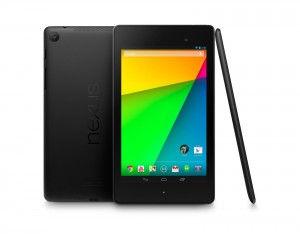 Other users also note that when the tablet is plugged in, the touchscreen behavior returns to normal. While still other reports suggest that this may be a touchscreen issue unrelated to grounding:

I’ve tried gripping in both hands, from the bottom bezel, on the table and on the couch. Still, I see this behavior. It’s not constant, but it’s prevalent enough that I don’t know if I’m going to keep it.

Right now it’s unclear still if this is a software or hardware issue. If it’s a software issue, then Google could launch a fix to all units when the software update is available, but if it’s a hardware issue it would mean that users would either have to ship their units back for repair or swap out affected units for a new one.

Moving from last year’s Nexus 7 to the newly refreshed Nexus 7 hardware for 2013, Google and Asus had slimmed down the side bezels of the slate. It’s unclear if that design change is correlated with the glitchy touchscreen that’s being reported.

If it’s unapparent that your 2013 Nexus 7 tablet has a multitouch display issue, you can try to download an app to test the touchscreen. One such app is Yet Another Mulitouch Test through the Google Play Store.