It appears that Samsung may have scrapped the pebble blue Samsung Galaxy S III in favor of a metallic blue Galaxy S III that almost appears to be gray in color.

SamMobile has spotted a video that seems to hint at the change. In the video, a Galaxy S III with a “metallic blue” backing is shown off. The device in question seems to have a grayish-blue backing rather than the very blue pebble blue color that we had previously seen on the Galaxy S III.

It also appears that at least some online retailers are now showing the metallic blue color in stock rather than the pebble blue color.

Oddly, four of the U.S. carriers that announced the device today – AT&T, Sprint, Verizon and U.S. Cellular – all say that they will have  a “pebble blue” Galaxy S III in stock when it launches this month.

T-Mobile has said that it will carry a “marble blue” and we assume that means the same as pebble blue. 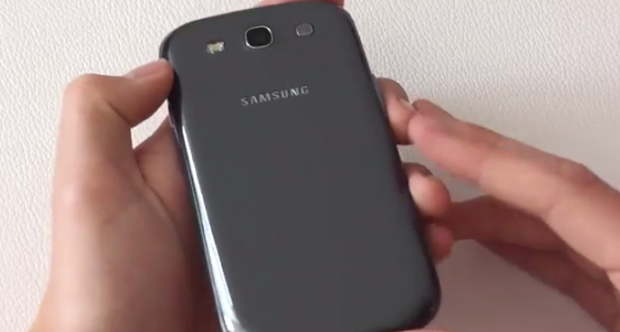 Samsung, for its part, has yet to confirm anything and it’s possible that something could be wrong with the quality of the video.

The news comes shortly after the company acknowledged that it was having quality issues with the pebble blue version of the Galaxy S III which has led to stock being scarce in international markets.

The company has said that the delays should be fixed in two to three weeks but now it appears that the company might be getting rid of the pebble blue color altogether.

At this point it’s unclear if this is the case or if the video just presents bad lighting.

In any event, would you buy this “new” color over the pebble blue if it were indeed the real deal?